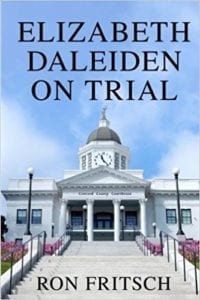 In the late 1970’s, Jonah Neumeyer, a young lawyer in Chicago, decides to return to the small farm town he grew up in, Revere, Illinois, to get answers about a horrific event that occurred twenty years prior when he was a child. Jonah and his grandmother witnessed a fire that burnt a house down with the occupants, two elderly men, still inside. He believed the only person who could provide the best answers to what exactly happened was Elizabeth Daleiden, the nearest neighbor to the burning house and the woman who inherited the farm that the men owned. What Jonah Neumeyer didn’t know was that by paying a visit to Elizabeth, he would stir up a past long thought to be solved and put to rest, and attract the attention of several notable people, Olivia Daleiden, former mother-in-law to Elizabeth Daleiden, and Tanner Howland, a state’s attorney with political ambitions. Truths and lies swirl together as the past is dug up and resurrected turning into serious accusations, and Elizabeth finds herself directly in the center of this and is accused of, and indicted for, being a part in the deaths of the two men. She faces not only imprisonment, but loss of the farm that has been in her family for generations.

Feeling partly responsible for innocently inquiring about the past, Jonah, who firmly believes Elizabeth is innocent, offers to help Elizabeth and her son, Eli, with their farming duties while Elizabeth and her lawyer prepare for this difficult trial. Meanwhile as time goes on, tongues continue to wag and more information is uncovered relating to two other supposedly mysterious deaths in Elizabeth’s past, her father and husband, leading people to wonder if she was also involved in their deaths.

As the story continues to unfold during the court proceedings, secrets are uncovered and testimony is heard that strongly points to Elizabeth’s complete culpability in not one, but all the deaths, forcing Elizabeth to do the only thing left that may stop her from going to jail. She must take the stand and testify in hopes that the jury will believe her versions of exactly what happened in each of the four deaths.

Readers are advised to pay careful attention to the list of characters in the beginning of the book since they may need to reference this list often as there are a plethora of characters, some with equal importance and strong personalities vying for the reader’s attention, while others merely float in for a few scenes. There are also a few parts in this story where the author takes a bit of artistic license with a few aspects of the plot, but this does not have an overall negative impact preventing readers from enjoying this novel.

Author Ron Fritsch has succeeded in crafting a dramatic story that hooks readers right from the beginning when they first learn about the person in the title of the book, Elizabeth Daleiden, and how she’s connected to a house fire twenty years prior. As time moves on, key characters are introduced, setting the stage for what the reader may believe is a typical crime drama, but surprise twists reveal a more complex plot that is coupled with issues of homophobia and small-town mentality.

Quill says: Ron Fritsch provides his readers with a page-turning courtroom drama filled with unpredictable plot twists that will entertain fans of the genre.

For more information on Elizabeth Daleiden on Trial, please visit the book's website at: www.elizabethdaleiden.com