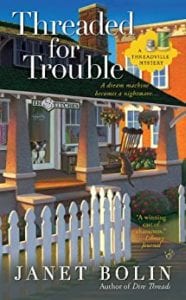 Willow Vanderling, the owner of “In Stitches,” a machine embroidery boutique, had just opened for another day’s business when an unexpected guest showed up. Elderberry Bay, or “Threadville,” as it was more commonly known, was a quiet town filled with “fabric and needlework shops” that attracted both tourists and locals alike. Felicity Ranquels, a Chandler Sewing Machine Company representative, had arrived on the scene to award a Chandler Champion sewing machine to Darlene Coddlefield, the winner of the Chandler Challenge. Felicity had the personality of a duck and was so seriously fashion-challenged she made Minnie Pearl look good. The sight of the woman was enough to make anyone’s eyebrows curl.

Finicky Felicity’s sewing skills, evidenced by the cardboard interfacing that plopped out of her polyester special, were obviously on par with that of her social ones. Dumpy Darlene Coddlefield, who was “nearly as wide as she was high,” flounced into the shop trailed by her unruly brood. It was prize day and she was there to collect that honking Chandler Champion and snub the other contestants. Haylee, Willow’s best friend, and her “Three Weird Mothers,” were in for a treat. Darlene’s eight children snickered and sneered as the drama unfolded. When Felicity presented the award, Darlene glanced toward someone in the audience with an evil, triumphant smile. Huh?

With the soap opera out of the way, Willow was able to relax and spend some time with her two dogs, Sally-Forth and Tally-Ho. She, like many of her students, was planning an entry for the International Machine Embroidery Competition, but she’d soon be thrown for a loop. Her idyllic respite was not to be. There was murder in Threadville and the victim was none other than Darlene Coddlefield. “You killed that woman,” Felicity seethed. Willow had been accused of tampering with the machine that somehow flattened Darlene (if such a thing were possible). Detective Gartener and Chief Smallwood were assigned to the case. Would Willow be able to unravel the mystery and sew up the case before someone else was hurt?

This scintillatingly silly, yet serious (not) mystery will keep you in stitches. If you are tickled by the likes of Ernest T. Bass, you’ll appreciate the occasional slapstick humor weaving its way through the pages of this cozy and crazy mystery. The storyline is crafted in such a manner that will draw the reader in, making it almost (but not quite) believable in its own way. I loved Willow, Haylee, her three mothers, and, if the truth be known, I grew to have an affinity for the unbearably boorish Felicity Ranquels. No mystery is complete without a touch of romance, something that served as a teaser for the next in the series. If you’re having a bad hair day, this cozy mystery will curl and comb it out for you...Threadville style!

Quill says: This delightful, lighthearted mystery will make even the most diehard curmudgeon chuckle with glee!