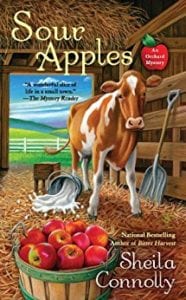 The Warren family estate was really nothing but a “drafty old house” that even Bob Vila would probably stay clear of, but Med Corey loved it. The farmhouse was home to Meg and Briona ‘Bree’ Stewart, her housemate and orchard manager. Bree’s excitement about expanding the apple orchard onto three acres of Seth Chapin’s land was infectious. Meg finally had to admit that she loved the idea, but any kind of long-term commitment with Seth was a bit unsettling. She wasn’t the only one having land problems. Joyce Truesdell, a nearby dairy farmer, had cow problems. In fact, one of them died and several others suddenly became sick.

Joyce’s land was obviously tainted, but how and why? Like Meg, she wanted to expand her operation and leased land from the town. Not many people wanted to step into small farm operations during tough economic times, but Joyce and her husband thought they’d give it a go only to experience disastrous results. Meg and Seth were headed to Granford’s annual Spring Fling and were hoping to have a good time. The Fling wasn’t disastrous, but Seth’s mood took a serious turn for the worse when Rick Sainsbury and his political entourage crashed the scene. The pretty little wife, the campaign manager, and the I’m-gonna-hit-every-chicken-pot-pie event in the county was written all over the guy’s face.

Another odd thing about the Fling was that Lauren Converse, Meg’s former co-worker, was that campaign manager. Huh? The weirdness of the Spring Fling events were quickly put on the back burner when Art Preston showed up at the farmhouse and announced that Joyce Truesdell had died when her Guernsey, Cyndi, purportedly kicked her in the head. Purportedly was the word for it because when the autopsy results came back things looked more like murder. Meg and Seth started to take a closer look and it wouldn’t take long for them to figure out that murder and mayhem were alive and well when someone was strung up in the rafters of a barn. What was going on in Granford and why did so many things appear to be connected?

Seemingly bucolic Granford is anything but bucolic when murder visits the countryside. This quiet whodunit is the type of mystery that invites readers who enjoy making sense out of puzzling riddles to join in. Meg and Seth, who appear to be somewhat hesitant partners, also reluctantly join forces to sort out and connect the threads between corporate corruption, murder, burglaries, and an errant political campaign. There were no spiking moments of high tension, but rather a steady stream of clues that invited me to think about connections. As I read I wanted to point things out the duo just might want to look into. If you like your cozy mysteries with a tight plot and a hint of romance, you’ll enjoy following Meg and Seth as they ferret out a murderer!

Quill says: An intriguing mix of murder, corruption, with a romantic teaser will keep readers asking for more!