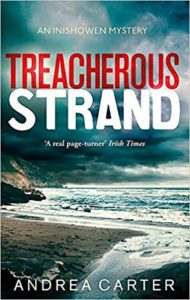 Benedicta ‘Ben’ O’Keeffe is at it again in the second of three planned mysteries that finds her trying to prove that the death of a client was the result of murder rather than suicide, as the woman's death report indicates.

Ben is a solicitor in the small (fictional) town of Glendara on the Inishowen Peninsula in County Donegal, Ireland. Glendara is the type of town where everybody knows everybody else's business which can sometimes make it hard for a solicitor to keep secrets. Ben will soon be hard-pressed to keep things to herself as she begins to dig into a client's death.

As the story opens, a body is found washed up on a beach on the peninsula. The currents in the area are deadly, and the police, or garda as they are called in Ireland, soon rule the death a suicide. When the body is identified as Marguerite Etienne, a French woman who had come to see Ben the day of her death, Ben is consumed with feelings of guilt. The reason? When Marguerite had come to see her that day to draw up a will, Ben had been too busy to complete the task. She hurriedly brushed off Marguerite and promised to get to the will as soon as she was able.

Feeling guilty at the way she treated Marguerite, and not convinced that she was so mentally fragile as to commit suicide, Ben begins to dig into the woman's past. She soon learns that Marguerite had escaped a cult years before, but had been forced to leave her baby daughter behind with the baby's father, the leader of the cult. Could the cult have something to do with Marguerite's murder? But then Ben gets her hands on the autopsy report and what she learns seems to point in a different direction. Maybe Marguerite was frightened and saw no way out. Perhaps the police are correct and it's a simple case of suicide...

As the second book in the Inishowen Mystery Series, there are a few references within the story to the first book. I have not read that one (Death at Whitewater Church), but had no issues following along/catching up with Ben's life and trials. Told in the first person by Ben, she's a strong, interesting character who is easy to like. The landscape of the Inishowen Peninsula comes to life through the author's artful descriptions and brings a strong presence to the pages. Likewise, the characters Ben works with, against, and for, also add a great deal to the story and make the pages come alive. The series is currently being adapted for television, filming in Inishowen. I'd suggest getting in on the fun before Benedicta hits the airwaves - you won't be disappointed.

Quill says: A great continuation to the Inishowen Mystery Series that has more twists and turns than one of the old side-roads on the Inishowen Peninsula.