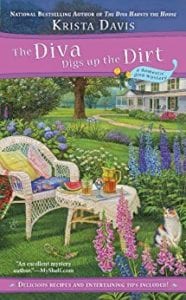 Desdemona practically lunged at Sophie Winston like a Venus Flytrap getting ready to engulf its prey. She wanted her to find her “little Anemone,” Linda, who had been missing for five years. Seriously, Sophie was not Jessica Fletcher, but rather an event planner who had coincidentally solved a few murders. All her Old Town nosy neighbors, including Francie Vanderhoosen, Olive Greene and her best friend, Nina Reid Norwood, would hear about Mona’s antics AND lies before the day was out. Sophie had her hands full getting ready to plan Roscoe and Princess Mindy’s Greene’s annual party, a party his ex-wife, Olive wouldn’t be attending. Not ever.

Sophie decided to pick up a rosebush and head over to her perennial boyfriend’s house and plant it in his backyard. Her own backyard would soon be invaded by hunk Troy Gardner and his “Tear It Up with Troy” gang for one of those reality shows. It was one of Natasha’s meddling projects and when the backhoe went through her fence it was a bit much. It wasn’t quite as bad as the dung doo problem at Roscoe’s when piles of manure landed in his yard, but still. Wolf was a homicide detective and Soph hoped a little feminine touch in his backyard would be appreciated.

Sophie was prepping the soil for the rosebush when all of a sudden she struck something and it wasn’t liquid gold. It was a handbag, “a nightmare wrapped up in good leather.” Mona quickly flounced into the yard, as well as any elderly Southern belle could, and began to scream. “My baby! He killed my baby!” Her “Linda” was none other than Anne Fleishman, Wolf’s missing wife. Olive always maintained he’d killed her, but it suddenly dawned on Sophie that she just might be dating a killer, a married one at that. The nightmare was only beginning. A mysterious theft, poisonous posies, and something even better awaited her at Roscoe’s...a hand peeking out from underneath a mulch pile!

Sophie Winston, Old Town’s darling diva, definitely knows how to dish up a murder...southern style. This fast-paced, zany mystery will delight old-time fans and charm the new with it’s tightly woven plot and quirky characters. The mystery was sometimes as dark and deep as that of du Maurier’s Manderley mansion in “Rebecca,” but more often than not will make the reader howl with glee with all the twists and turns of the plot. It isn’t often that the discovery of a corpse will bring tears to one’s eyes from unabashed laughter, but Davis does just that. As soon as I was convinced that I’d caught the murderer, another character would become suspect. The whodunit could have been almost anyone, but just who was it? Was it Olive, Audie, Violet, Roscoe, Wolf, Princess Mindy...

Quill says: If you like your cozies quirky, over-the-top funny, and hard to solve, Krista Davis can definitely dig one up for you!