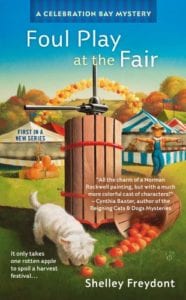 Liv Montgomery was more than happy to leave behind Manhattan’s pushy, overbearing, bridezillas for quaint upstate New York’s Celebration Bay. She’d taken over Janine Tudor’s job as event planner and, in return, almost got run over by her nasty attitude and cream-colored Caddie. Not to worry because at least it wasn’t a Yellow Cab and businesses with names like Apple of my Eye Bakery and the Buttercup Coffee Exchange promised her a much less melodramatic life than she’d been leading ... or so she thought. Liv and her partner, Ted Driscoll, were up to their ears in planning The Harvest by the Bay Festival, but soon events would take a turn for the worse and Liv would unexpectedly find herself being churned up and spit out in Celebration Bay’s gossip mill.

The five Romanian Zoldosky brothers, a bunch of sleazy ex-carnies weren’t high on Liv’s list of favorites. When she told them to cut out the panhandling they didn’t take kindly to her, nor her to them. Their attempt to intimidate her was a bit unsettling, but on the other hand vendors like Joss Waterbury, who sold “fresh cider and cider donuts” would be a joy to work with. One man who wasn’t quite an ode to joy was Chaz Bristow, the owner of the town paper, “The Celebration Clarion.” Ads for the festival were important, but Chaz had as much panache as Gorilla Monsoon. Such an oaf. Liv Montgomery was going to need a few swigs of hard cider before the day was done.

Cold cider quickly turned into hot murder when a clown was stuffed into one of Joss’s antique cider presses. It appeared that “Mr. Zoldosky had juggled his last scarf,” but upon closer examination, the corpse turned out to be none other than Pete Waterbury, Joss’s long-lost, useless brother. Celebration Bay was a town of long-buried secrets and their Smokey and the Bandit scanners sent them running to the scene to rediscover one of them. Sheriff Bill Gunnison would check out the “incident,” but the cogs of the gossip mill began to make Liv’s head spin. A Peeping Tom had been reported, a check was missing from her registry, the long-ago murder of a boy named Victor came to light, and suddenly she was seen as an intrusive outsider. Liv had to solve the murder or the town would cancel the festivals, but it didn’t seem likely when “something was yanked over her head” and she was dragged into the darkness ...

This striking new series in Celebration Bay, a town of dark secrets, is simply captivating. Liv Montgomery, who never intended to exchange her job of planning festival motifs for a murder investigation, proved to be a fascinating sleuth. She was a no-nonsense professional who took her investigation just as seriously as her work. Her character was the polar opposite of fluff, something that one might expect from someone who would be paid for planning an event like “Haunted October.” I totally enjoyed the well-crafted journey back through time as Liv unwittingly found out the town’s Stand by Me-like secrets and lies. A little nostalgia, a secretive town, and a hot new sleuth made this mystery a winner!

Quill says: If you like your cozy mysteries sweeter than cotton candy, but just as exciting as the Screamin' Swing, you'll love this new series!