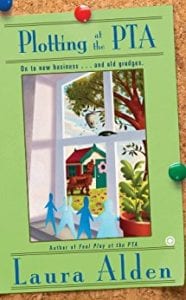 Beth Kennedy, owner of the Children’s Bookshelf, mom to Jenna and Oliver, and some kinda aggravated secretary for Rynwood, Wisconsin’s Tarver Elementary PTA just couldn’t seem to find enough hours in the day to get things done. Beth’s entire life felt like some kind of run-on sentence these days. Her children were a definite plus as was her current beau, Evan Garrett. He was everything she thought she wanted. On the other hand, Claudia Wolff, Tarver Elementary’s pita PTA vice president, was everything she didn’t. That woman spent a lot of time tooting her own horn and trying to “un-approve” Beth’s senior story project at the Sunny Rest Assisted Living facility.

Tarver’s seniors were going to interview the Sunny seniors and their stories were going to be published. The book would be a nice fundraiser and a definite distraction from thinking about Sam Helstetter’s murder. It wouldn’t be long before Beth was in the murder-she-wrote mindset once again when Amy Jacobson was found deader than a squashed ant in her yard. Agoraphobic Amy never left her property and when she ventured outside, she carried her EpiPen and was armed and ready to kill anything remotely buzzing with her bee killer. “The way Amy died seems a little...off that’s all,” Beth spouted off to her best friend, Marina Neff. Excuse me? Everyone knew it was an accident.

Police Chief Gus Eiseley didn’t want to hear her little theory either, but it wasn’t long before yet another one was distracting Beth. “Kelly didn’t do it, I tell you. She didn’t!” Didn’t what? Mean bean Auntie May, a Sunny Rest resident, had roped her into investigating the death of Maudie Hoffman’s great-niece who had supposedly committed suicide in Blue Lake more than twenty years ago. Beth sensed a surefire connection between Amy’s mysterious demise and Kelly’s. Could she solve the mysteries before Maudie died? Everyone, including Chief Eiseley, was putting her on ignore except for one person...the one whose hands reached up to clutch her throat in a death grip!

This delightfully charming mystery epitomizes the word “cozy.” The interconnected mysteries in this book quietly unfolded as Beth went about her job as a bookstore owner, mother, and secretary of the Tarver Elementary PTA. The story, minus the mysterious murders, was of a life that many women can relate to. I chuckled when she “suddenly felt sorry for Jenna and Oliver” because she claimed she was such a moron of a mother and an eyebrow raised when she was entered into a “weight loss contest.” Beth was definitely a loveable, likeable, and big time nosy ‘n’ reluctant sleuth that readers can add to their list of favorite cozy characters!

Quill says: If you want to stick your toes in the sand and read a totally relaxing book, you're going to love Plotting at the PTA!