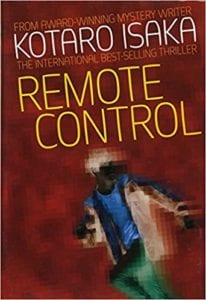 The setting is Sendai, Japan in the near future; the newly elected Prime Minister has been assassinated using a bomb attached to a remote controlled toy helicopter. The main suspect is a former deliveryman by the name of Masaharu Aoyagi. Masaharu had come into a little publicity years before the assassination, when he rescued a young woman from a deadly assault. This remembered publicity from the past seems to make Masaharu the perfect person to frame for the Prime Minister's death - changing him from hero to villain overnight. The police and government security forces chase him throughout the city, and Masaharu's exploits as he tries to evade capture are the bulk of the plot, keeping readers on the edge of their seats panting for more. (Images of David Baldacci's chase scenes in The Firm spring to mind with every "near escape.")

A look into Japan's superior technology is given to the readers as the hunt for Masaharu continues. On every street corner in the city there is a device called a 'security pod' which is likened to R2D2 of Star Wars fame. This device takes photos of people on the street and monitors cell-phone records and email conversations so everyone is covered. As the Japanese are very techno conscious, this is a great invention. Not to mention, "paranoia lovers" will automatically believe that this is one device that the U.S. of A is already using. As Masaharu leads the authorities on a 48-hour run through the city, the author offers tidbits that will remind Americans of the John F. Kennedy assassination, with Masaharu in the role of Lee Harvey Oswald, who conspirators still think was framed. Readers will get drawn into Masaharu's flight and wonder who has set him up for this murder. Hopefully, he can solve this case and prove his innocence, putting a stop to the many media stories condemning him.

Certainly the government is corrupt but, readers will have a difficult time exposing the bad guys. Masaharu's fate is not completely explained, which means that the author might be planning a sequel. There is a lot of squeamishness in talking about the 'powers that be,' especially when the street corner cameras are in motion. They are supposed to supply help to the police but sometimes end up going after an innocent person. The cameras were "designed to increase the quality and quantity of information available for crime prevention and investigation;" but each and every reader will truly feel as if Big Brother IS actually watching.

Quill Says: In his native Japan, Kotaro Isaka is an award-winning mystery writer and can be compared to our Vince Flynn or, maybe, James Patterson. Although translations can be a bit tough to read, the 'scary' stuff that the government may or may not own is definitely something to think about!