In the Garden of Beasts: Love, Terror, and an American Family in Hitler’s Berlin 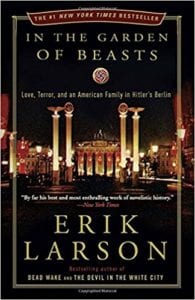 This novel is so good you feel as if you are right there in the midst of all of these events (good and bad) that took place in the years before the Nazis decided that they should own Europe. Not since The Devil in the White City, another book by Mr. Larson published in 2000, has there been a book so well researched and captivating.

In the year 1933, Mr. William F. Dodd, a Professor from Chicago, along with his family (wife, daughter and son) were sent to Berlin by President Franklin D. Roosevelt, to become the American Ambassador. Mr. Dodd was the first Ambassador to Germany from the US and settled in Berlin during the year that was to become a turning point in history. Mr. Dodd, a fairly docile gentleman, was perfectly willing to accept the German politicians and their ways, which proved later on, that he was a bit overly naïve. Mrs. Dodd and Bill, Jr. were content with their lot in life and daughter, Martha, was extremely social and loved to party. Some of the handsome young men of the Third Reich were more than happy to show her the town. Martha was so impressed with these men that she had many affairs, one of them with the head of the Gestapo, Rudolf Diels.

But, as the days progress, it is evident that the new regime in Germany is starting a little “ethnic cleansing,” as they say now, and the Jewish race and many others are being persecuted. These attacks against citizens of Germany are certainly not kept quiet and Mr. Dodd is getting very nervous and sending letters back to the State Department telling the President what is going on. Sadly, the State Department is very unconcerned about the letters and thinks that Mr. Dodd is crying wolf. Mr. Dodd watches the new laws passed by German Chancellor, Adolf Hitler, and also the newspapers are censored as to what they can write. He even has a meeting with Hitler, where Hitler swore that he was not interested in starting a war. Unfortunately, Mr. Dodd believed Hitler and said so to the U.S. State Department.

As Dodd’s first year as Ambassador ends, the shadows of war creep forward. It becomes clear that Chancellor Hitler is arming Germany and biding his time before invading other countries and starting the 1000-year Reich. After a horrible night of murder and mayhem, Mr. Dodd is sure that Hitler is heading toward war.

A wonderful non-fiction narrative that tells the reader that the United States did not realize what Hitler was doing behind everyone’s backs until the invasions started and the world was at war.

Quill Says: Even though this was a terrible time in the history of the world, this book is an absolute MUST READ!!!