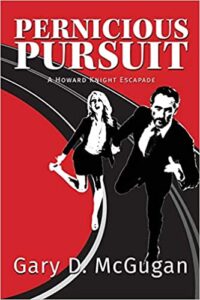 The action spans continents while real emotions grip the characters chasing each other for love and profit in this latest offering from thriller creator Gary D. McGugan.

When Howard Knight wakes up, he senses danger, and within a few minutes he’s in the middle of it, beaten, tied and tossed in the back of a vehicle moving to who knows where. Janet Weissel, his lover, “a keeper” he calls her, wakes up just in time to save herself from the same fate. Following advice given by Knight for just such an emergency, she flees their home and goes on the run. Not long afterward, although she has no way of knowing it, Knight, transported from the Netherlands to Spain, has also escaped his captors and moves from scooter to stolen scooter, changing outfits off clotheslines and subsisting at one point on nothing but oranges. Weissel is unsure what the pursuers want, but Knight is all too aware: he’s being hunted by one of the most powerful men on earth, a man with far more money than morals, the infamous Giancarlo Mareno, head of The Organization. There’d been a time when Mareno and he had been on the same team, but now Knight is not only hoping to save his own skin and protect his lover, but also to uphold and sustain a more rational, less destructive life plan.

In Pernicious Pursuit, McGugan has drawn from an earlier trilogy (Three Weeks Less a Day, The Multima Scheme, Unrelenting Peril ) involving Knight and many colorfully nasty underworld associates locked into corporate greed at its worst. Now he puts his protagonist in a different light, still tough, even brutal when the situation calls for it, but also capable of remorse and tender, uplifting feelings. McGugan displays an especial sensitivity for the women in the story: Katherine, a smart but nurturing woman with a big dog and the means to control it; Klaudia, one of Janet’s protectors who is battling Giancarlo own her on battlefront - the trafficking of women for prostitution; and even Nadine, a beautiful madam who enjoys her role until she begins to realize that the “love” her bosses profess is entirely superficial. The chapters in this fast-paced plot jump from character to character, all interlinked by the hand of fate - some scheming, some grieving, and some learning valuable lessons about how stuff really works in the world beyond the headlines. The author will bring them all together in a series of crossing paths until, in the final pages, murder finally finds a suitable mark.

Quill says: McGugan’s title says it all: a man and a woman try to save themselves and each other, searching the globe for some sense of safety, not only from a cold-hearted murdering mogul but from a scarred society that undervalues half its assets – the female half.