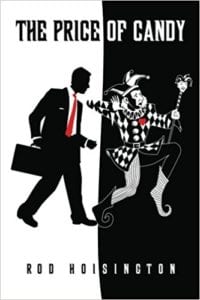 She was beautiful, but lay awkwardly on the sands of Privado Beach like a piece of discarded flotsam. Two men stared down at her half-naked corpse unable to fathom what would happen next. Freddy, the older of the two, was visibly shaken, but the younger man, Toby, who had ambled onto the scene, was complacent and urged the stranger to leave. He had nothing to do with her death, but Freddy was whining, “You don’t know the half of it. You wouldn’t believe the fallout there’s going to be about this.” Who cares? The sniveling man was going overboard with this woman’s untimely demise, especially since he’d tried to save her. “So, go. Get out of here. You don’t have to get involved. I’ll look after her. Things like this happen all the time.” But things like that didn’t happen all the time and Frederick J. Kidde would soon find out its consequences.

When Betty Jo “Candy” Hodges, a “dancer” at The Blue Triple X in Baltimore, was left on that beach the tentacles of her accidental death would reach out to grab even the most innocent of people. Sandy Reid, a former field investigator, was one of them. She worked in Jeremiah Kagan’s law office in Park Beach while she studied for her bar exam. Like the butterfly effect things began to roll when she accepted a telephone call from Abby Olin, someone she had very tenuous contact with in the past. They were together in juvie, so Abby claimed, and their only connection was a lecherous, “creepy counselor” named Bruce Banks. What harm would it do to get together for lunch? Sandy had escaped unscathed, but she had “vowed to go after him for Gloria’s sake,” a gal that didn’t fare as well.

“Back off lady” was a fine thank you ma’am greeting from Abby's ten-year-old child, Jamie, but then again Sandy was only offering to help her. Abby turned out to be somewhat less than the mother of the year, but what could anyone expect from someone who actually liked Bruce. She liked money and was not only going to get more, but she was going to use that drip Sandy Reid to get it. The kid had said something about child pornography so something had to be done. Sandy conned Detective Pomar into checking out the house with her after hours with a night-vision scope, a piece of equipment he claimed was “all the rage with voyeurs.” A voice cried out the name “Toby!” piercing the silence. It started out as a simple stakeout, but soon a shot rang out and a prowler lay dying outside Abby’s house. “Maybe the medics can revive him, but I think that man out there is dead.” Pomar wasn’t mincing words on this one and later State Attorney Lawrence Moran,” who had a grudge against Sandy, later had one little terse message for her via a sheriff’s deputy: “You’re under arrest for conspiracy to commit murder.” Ah, but what did a little “Candy” and Congressman Freddy have to do with all of this?

This is the second in the Sandy Reid mystery series following the fast-paced One Deadly Sister. I did not read the first mystery, but I can guarantee you that this one can definitely stand alone. If you want a cozy mystery you need to look elsewhere, but if you want a hot, steamy mystery that could rival anything a“CSI” type genre can cast out at you you’ll be hooked from the first few pages. This tale was so tightly knit I honestly didn’t know who really assaulted the corpse until the very end. Sandy, an “impudent tousle-haired young woman,” was perfect in her role as an investigator. And there was plenty to investigate from a kidnapping to blackmail and murder. It was an intriguing tightly woven mystery with subtle sexual overtones woven throughout much of the story.

Quill says: If you want a tantalizingly complicated, slightly hot and spicy mystery, The Price of Candy will offer you a tangled web you won’t forget any time soon!

To read the review on the first book in the Sandy Reid Mystery Book Series, One Deadly Sister, click here.

For more information on The Price of Candy, please visit the author's website at: www.rodhoisington.com