A Body To Bones 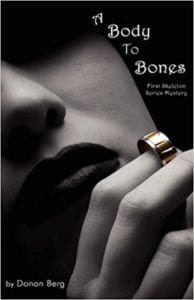 A Body To Bones

Town gossip, a long-ago brief affair, missing church bake sale funds, a mysterious lakeside property, strange letters scratched onto a brick, and a skeleton found in a cistern at an abandoned factory are just some of the things confronting readers in the new suspense novel A Body To Bones by Donan Berg. This debut novel takes the reader on a whirlwind chase through small town secrets and hidden agendas.

The little town of Clinton conceals many secrets but Thomas Hamilton, the publisher of the local “Pioneer Ledger” thinks the most exciting thing in his life is whether his paper will get out on deadline. That is until a young boy, while playing with a friend in a secret tunnel at the above-mentioned abandoned factory, discovers human remains. The residents quickly go into a frenzy. Who was it? Is the skeleton that of a man or a woman? Was the person murdered?

While Thomas and others become amateur sleuths and relish the thought of discovering who was buried at the factory, his wife Sarah is frightened. She’s been harboring a dark secret that has been eating at her for years and she fears that the skeleton’s discovery may bring that secret to light.

The investigation heats up when ‘Old Man Peterson,’ who owned the factory, and whose wife vanished years earlier, is suspected of murder. But is the skeleton that of his wife? Or could it be another person?

The plot of A Body To Bones takes many false turns and keeps the reader speculating on the identity of the suspected murderer. The characters, while bantering back and forth, come up with numerous theories, in part, no doubt, to mislead the reader and add to the fun of the story.

A Body To Bones is written in the present tense which can be a difficult writing style to present effectively. Indeed, there are several spots where the author stumbles and the narrative, and dialog, is forced. There are also places where text shifts from present to past tense within the same sentence or paragraph, making reading cumbersome, “While Thomas was at the Farmers’ Elevator, Sarah is busy trying to catch up with the laundry.” (pg. 112). Several segments jump from third person to first, in an attempt to provide background information but in doing so, the old standby of “show, don’t tell” falls by the wayside. When Sarah is in the abandoned factory, her thoughts take over and the reader is given over five pages of her past, beginning with her childhood, from her point of view. It seems forced and breaks up the flow of the story. Still, with these minor faults, Berg’s debut novel offers a fun adventure into the world of small town secrets and shows promise for his follow-up book, The Bones Dance Foxtrot.

Quill says: A Body To Bones offers a story that will have readers questioning the motives of almost all the characters caught in the twisted plot.