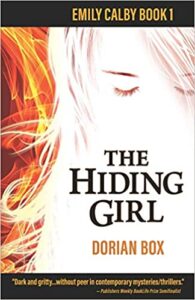 The Hiding Girl is a character-driven novel featuring Emily Calby, a young girl who is seeking revenge against the two men who raped and murdered both her mother and younger sister. Throughout this mystery-thriller story, Emily wrestles with various trauma-related mental health issues, all while trying to survive by herself out in the world.

Author Dorian Box keeps his audience on the edges of their seats with the gripping first installment in his new Emily Calby series. He invites them into Emily’s head as she travels the United States, searching for clues to the identities of the men who took her family from her. She is constantly on the alert, for she knows that while she is hunting the men, they might very well be hunting her as well. The tension of this situation is excellently conveyed to readers, keeping them engaged and eager to find out the ending. With this novel’s speedy pacing and binge-worthy plot, it is an ending that can easily be reached in a few short reading sessions.

One of the defining themes of The Hiding Girl is how Emily copes with the extreme amount of trauma she has endured in a very short span of time. It affects all of her actions and stays with her throughout her pursuit for justice. Most importantly, it doesn’t just go away once she accomplishes what she feels she must. Box makes a point to demonstrate how recovery from trauma is a long, winding road that differs for everybody. There isn’t any “instant cure.”

Family relationships also play an important role in Emily’s story. Her tale begins with the death of her own, and she must quickly adapt to being alone. Without her mother and sister, she doesn’t have anyone to look out for, or to take care of her. Being by herself so suddenly is a shock to her, and readers easily sympathize with the deep loneliness she endures before she finds a new family to support her.

The relationship between Emily and Lucas, a friend she meets on her journey for revenge, is one of the best parts of this novel. Amidst the chaos of running for her life and plotting revenge against the two men, Lucas is the first person Emily manages to form an emotional connection to after the destruction of her family. This relationship is a central part to both Emily’s revenge seeking and her development as a person. She’s very young, only twelve to thirteen throughout the novel, and just beginning to come into her own identity. Watching her find a family, not only with Lucas, but with other characters she meets along the way, is touching.

Emily is also thrown face-to-face with several harsh pieces of reality during her time on the road, one of the most shocking to her being racism. As a white person, it’s not something she has ever experienced before befriending people in the black community. She is taken aback by the bluntness of it. One scene in particular stands out. Faith is a big part of Emily’s life. Near the end of the novel, she and Lucas are asked to leave a church, as this particular church has a policy that prohibits mixed families from joining them in worship. She asks the other church-goers for support and is ignored. It’s only one example of a larger issue briefly explored during the story, but reading it really shows how oblivious people can be of inequality until they directly experience it.

The Hiding Girl is an excellent novel for fans of character-driven mysteries and thrillers. The narrator is a child, and as such, views the world through the eyes of one. Many of her observations are deceptively simple, and adults reading this novel will be surprised by how deeply some of them can hit.

For more information on The Hiding Girl, please visit the author's website at: dorianbox.com