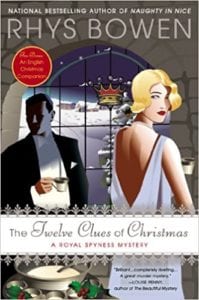 Lady Georgiana Rannoch, sister to the current duke, had impeccable royal credentials, but she was stone broke. Even great-grandmama, Queen Victoria, couldn’t help her there. In the meantime she was stuck in her ancestral home waiting on her sister-in-law, Fig, instead of waiting for her prince to come. “You’d have thought,” spouted Fig’s mother, Lady Wormwood, “someone would have taken her off your hands by now.” Darcy O’Mara was no prince, but if Georgie did get the chance to marry him it would be for love. That was if he quit that spy stuff and asked her. Thirty-fifth in line for the throne and stuck in Castle Rannoch in a blizzard. She’d throw a wobbly, but that just wouldn’t do. Not today anyway.

But wait, there could be something that might help. Lady Camilla Hawse-Gorzley had placed an ad asking for assistance in hosting “with the social duties of large Christmas house party.” Georgie was going to get that job, leave, and would even take her walking catastrophe of a maid Queenie with her. She’d “set her former employer on fire with a wayward candle,” but hopefully she’d behave. When they arrived they discovered everything had gone all pear shaped because Freddie Partridge had shot himself in a pear tree. Honestly, of all places to top oneself. Their stay Tiddleton-under Lovey, Devonshire was starting off with a bang.

It would be perfect because her granddad, Albert Spinks, also was in residence in Tiddleton. Oh, and mummy had taken up with Noel Coward there too and Darcy was there. Georgie quickly learned that everyone was saying that the Lovey Curse had struck again after Ted Grover’s body “were found drowned in Lovey Brook this morning.” Two bodies in two days? If anyone believed that nonsense they were all nutters, but when someone was gassed the next day and electrocuted the day after that it looked rather odd. The party must go on and Georgie would help with it. Inspector Newcombe claimed it was coincidence, but there were some blokes who had escaped from Dartmoor. Georgie was leaning toward the Curse, but was convinced when crazy Wild Sal warned, “You might want to watch yourself miss, or you might become a cropper.” Would she be able to figure out who was offing people or would she end up like that Partridge in a pear tree?

This ever-so-slightly hysterical Christmas mystery will leave the reader gobsmacked. I really had no idea what I would be getting into as this particular mystery didn’t look like my cup of tea. When I started reading, I could hardly stop. It was amazingly witty, the characters charming, and the plot was extremely well put together. Lady Hawse-Gorzley’s party brought the crazies out of the woodwork, adding even more interest to the plot. Of course the ones who were being knocked off were equally interesting and woven perfectly into the mystery. There were a lot of characters, but I had no problem sorting them out and keeping track of them. No one is going to need twelve good reasons to love this book because one will do ... it’s perfect!

Quill says: If you like your hysterical historical fiction a little on the royally fun side, you'll love The Twelve Clues of Christmas!