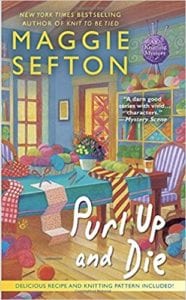 Cache La Poudre Canyon had needed a lot of restoration work since the previous year's wildfires. The land was under transformation, but that wasn't the only thing undergoing change. It had been tough, really tough, for builders during the building bust, but somehow Steve Townsend managed to hang in there. Times had been tough between Steve and Kelly Flynn as well, but that was all in the past. Steve was now a partner in Kaufman and Townsend Construction, a fact that made Kelly über-proud of him. Kelly had experienced a lot since moving to Fort Conner, and in the six years since she'd arrived, the word 'regret' hadn't entered into her vocabulary.

Fort Connor was now her home and, of course, Lambspun was her home away from home. Well, perhaps the knitting shop was more like a stone's throw from her doorstep. It was a great place to work on improving her knitting skills, socializing, and balancing financial statements. A good cup of java and Kelly was going to "balance Dan Warner's financial statements or die trying." Lambspun had been somewhat of a murder magnet in a way, but in addition to improving her knit one, purl two technique, Kelly was working on improving her sleuthing abilities. Whenever there was a murder to solve, retired detective Burt Parker was her go to partner.

Trouble suddenly seemed to hit Lambspun and it wasn't as simple as a dropped stitch. Big Bossy Barb had been ecstatic over the fact that her son Tommy was a standout resident. The my-son-is-a-doctor babble was practically her mantra until something went terribly awry. "Tommy started pressing on her stomach in serious places," Barb began to explain. The explanation turned incredulous when she relayed the fact that he'd been accused of groping her. Sexual assault. "Can you believe that?" Kelly wasn't quite sure what to think when the overly-protective Barb ranted on. Did little Tommy do in Laura Brewster when he took the night off to, ahem, 'study?'

Laura seemed prone to having professional men grope her, or so it seemed. It was a kiss and yell sort of situation that had already been a career wrecker for Professor Smith. Someone had decidedly decided enough was enough and had taken her throat into his hands for the last time. Unfortunately "violence had come close to Lambspun," but the case wasn't quite as easy as it appeared to be. Was Laura a truly unfortunate victim at the hands of men? Was Barb's precious Tommy as innocent as he pretended to be? "He saves lives. He doesn't take them," Barb fumed. Someone was lying and Kelly had to unravel the lies!

Kelly Flynn is once again on the trail of a mysterious murderer, working the case with Burt Parker. As expected it's like visiting with an old friend every time I pick up a book in the Knitting Mysteries series. Even though I haven't read them all, they are so well-written I have no problem picking up the storyline where I left off. Kelly is a classy, cool sleuth, one who never fails to disappoint. I love the strong cast of characters, including her Rottweiler, Carl, and Brazen one, the squirrel he never catches. The storyline was tight, fun, and for once I was able to figure out whodunit by putting together those subtle clues. If you've met Kelly before, you'll love this cozy mystery. If not, this series is well worth reading!

Quill says: Can you say 'to die for?' Fort Connor's Kelly Flynn is one of the best!