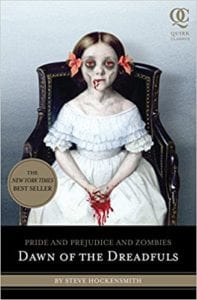 Elizabeth, Jane, Mary, Lydia and Kitty; names so familiar and beloved to diehard Jane Austen fans. Zombies, too, are becoming quite familiar to readers of Austen prose. In Dawn of the Dreadfuls, the prequel to the popular Pride and Prejudice and Zombies, readers will discover how the girls learned to fight so valiantly, and where the zombies came from (well, sort of, we never really find out the whole story).

Dawn of the Dreadfuls gets off to a quick start. The Bennett family, as well as much of Hertfordshire, are attending the funeral of Mr. Ford, the local apothecary. But Mr. Ford doesn’t want to miss out on the ceremony, so he pops up out of his casket. Actually, Mr. Ford can’t quite get out because his legs were severed two days prior, thus the reason for the funeral. As Mr. Ford, now a zombie, tries to free himself from the confining space of the coffin, Mr. Bennett jumps into action, slaying the creature.

After the raucous upheaval at the funeral, Mr. Bennett realizes the zombies are coming back. It turns out he was once a member of a secret order sworn to destroy the “unmentionables,” but he went astray when he failed to raise his daughters as warriors. With the return of the zombies, there’s no time to lose; Mr. Bennett must train his five daughters to fight. While Mrs. Bennett is more concerned with an upcoming party, her husband cleans out the greenhouse and converts it into a dojo. Slaying 101 is about to begin.

At first, the girls, don’t have the stomach or desire to fight, but when a mysterious member of the “Order,” Geoffrey Hawksworth, arrives, training begins in earnest. Before long, the girls are the pride of Hertfordshire, Jane is ensconced in the house of Lord Lumpley, as protector (and target of Lumpley’s lust), while Elizabeth is somewhat beguiled by Dr. Bertram Keckilpenny, a doctor intent on discovering just what zombies are thinking, or if they are thinking.

Although it might, at first, be hard to accept the prim and proper young Bennett ladies as sword wielding warriors, if you can get past that silly premise, Dawn of the Dreadfuls is a lot of fun. The action is almost non-stop, with plenty of zombie slashing, all leading up to a big battle at the end.

While there is talk of Lizzy’s coming out party and a bit of old-fashioned wooing, that’s about where the similarities with the original story end. Mr. Bennett and his girls stray far from the characters of Austen’s pen with only the dotting Mrs. Bennett and Mrs. Hill staying relatively true to form. It is the male characters (based on those from the original book), however, that really make this book shine. From the self-absorbed Richard George Saunders-Castleton Harper-Milford Norman-Stilton-Harrowby Lumpley II, aka Lord Lumpley, to the limbless Captain Cannon, who gets pushed around in a wheelbarrow and uses two soldiers, “Left Limb” and “Right Limb” to do his bidding (“Limbs! Embrace the lady!”), the gentlemen in this story add personality and laughter.

If you’re a diehard Austen fan who savors every word she wrote, Dawn of the Dreadfuls may not be the right book for you. If, however, you relish alternative fiction, and like plenty of action, humor, and smart English girls outsmarting their gentlemen counterparts, grab a copy of Dawn of the Dreadfuls before they’re all sold out.

Quill says: Quirky, bizarre, irreverent, gory, Dawn of the Dreadfuls is also a heck of a lot of fun!