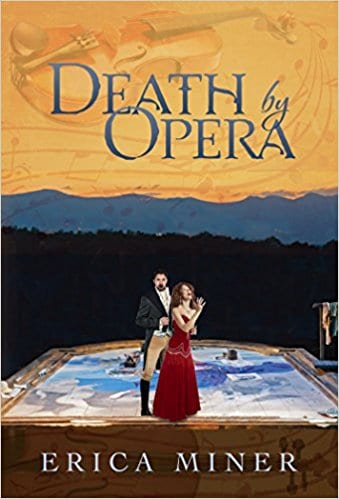 For those who have met Erica Miner’s awesome character, Metropolitan Opera violinist Julia Kogan, you will be thrilled with this newest murder mystery.

Julia has just recently gotten out of the debacle that occurred at the Met in New York. It was there that murder took place and had caught her up in a web of lies, suspects and mayhem. Now looking forward to a far calmer summer, Julia goes on assignment for the warm months in the coveted role of concertmaster for the Santa Fe Opera Company, during the world-renowned summer opera festival. Larry Somers is an NYPD Detective and also Julia’s significant other. And let us just say, after the murders at the Met, he’s more than a little exhausted himself. One thing is for certain, though, neither Julia nor Larry ever expected the beautiful, mystical world of New Mexico to involve even more death and destruction.

As a citizen of this great state, this reader can tell you that tales and legends in regards to the area of Santa Fe abound. In fact, the author begins Julia’s new tale with a Prologue that causes the hair on the back of your neck to rise. It is the year 1610, and at the base of the Sangre de Cristo Mountains of Santa Fe, on the site of an ancient Pueblo Indian ruin, the Governor and his crew make a plan for a city to be built. One hundred years later, a shadow of a figure digs a deep hole in this spot and then walks away, leaving nothing but a hollow void behind that is set aglow by the special Super Moon.

Although Julia arrives with happiness in her heart at being able to take a step away from “The Big Apple,” it does not take long before this amateur sleuth once again finds herself in the middle of a killing spree that is happening backstage. This is one of those times where the show must go on; but now it must do so while Julia is wrapped up in meeting new faces and trying to glean who they are, if they’re angry and, if so, what they’re angry about before another performer or artiste falls to their death. Chaos ensues while readers get to revel at the outdoor elegance of the Santa Fe Opera Theatre, learning with each step Julia takes what an old legend has to do with the very current, harsh reality.

Julia, her officer boyfriend, her life, and all these amazing characters that are brought to the page, from a costume director to an Italian diva and beyond, make this a compelling mystery that is the perfect continuation for author Erica Miner’s series.

Quill Says: Get on board with this violinist now. You will not be disappointed by these action-packed mysteries that are as memorable as the music that “accompanies” them.