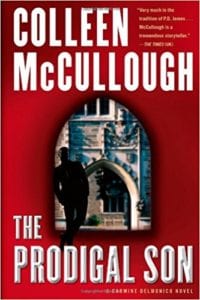 In her latest novel in the Carmine Delmonico detective series, The Prodigal Son, Colleen McCullough begins by introducing John Hall, long-lost son of publishing magnate Max Tunbull. Hall left his Oregon home and traveled to his father’s Holloman, Connecticut home for the reunion. The moment has arrived and he is standing on the doorstep. As he pushes the doorbell, Hall takes pause once the sound of Beethoven greets his ears. While this may seem inconsequential, Ms. McCullough artfully sprinkles this type of random humor throughout the book which tells me she is toying with the reader to pay attention. The door is whisked open shortly thereafter and Hall is greeted by a gushing and quite glamorous Slavic beauty. Hall soon learns she is Devina Tunbull, his step mother. She appears to be closer to his thirty-something years versus his estranged father’s sixty-something age. Once ushered inside, Ms. McCullough focuses on the scene before Hall; concentrating on the mix of high society snobbery, sumptuous cuisine, and just the right amount of pomp and circumstance. This is the family Hall never knew.

The plot continues to thicken once the dinner party is underway, but McCullough does not drag the reader through information ad nauseam. Rather, she caters to her audience; treating them to witty banter and simple dialect as she plants the clues in her 'who done it' garden. As she gains momentum on course to the first murder, McCullough presents two more key characters—Jim and Millicent (Millie) Hunter; quite the odd couple given they are a bi-racial married couple in the 60’s. She is explicit when she explains how unforgiving the aristocracy can be toward such an arrangement in that era; but quickly overcomes the 'taboo' by gracing both characters with impressive pedigrees of scientific knowledge and respective brilliance. Their connection with the Tunbull dynasty is not only their friendship with John Hall pre-Holloman; but also with Max Tunbull. It is the latter who holds their future notoriety once Jim's masterpiece, A Helical God, is published by Tunbull Publishing.

Shortly after dinner and before evening's end, the first murder occurs. A murder mystery would not be complete without its diabolical villain. In this case, it is a rare strain of poison called tetrodotoxin and is derived from none other than the unsuspecting blowfish. To complicate the plot further, the reader soon learns that Millie happens to be the scientist who developed the strain. Barely twenty pages into the novel, Ms. McCullough has successfully used her page turning real estate to commit the first crime. To be sure, the reader will continue on because she has only given the reader the mere tip of the ultimate iceberg.

It is impossible to sit and pay homage to each delectable character Ms. McCullough created without writing a ten-page review. Carmine Delmonico, however, deserves his time in the spotlight. He is the mainstay of this crime novel and holds the esteemed title of captain of the police force. He also becomes lead investigator of the multiple crimes that will unfold throughout this story. With the perfect balance between witty and direct, Ms. McCullough has done a superb job of creating not only likeability in Carmine Delmonico, but believability as well. She identifies his perseverance and passion toward crime solving by making him street-savvy and most familiar and comfortable with his detective lingo. However, to make him a bit more interesting, Ms. McCullough threw in a nugget to thicken the plot. It would seem Captain Delmonico is Patrick O'Donnell's cousin who just so happens to be Millie Hunter's father.

McCullough has mastered a culinary word delight in serving up this deliciously fast-paced and quite witty murder mystery. I liken this story to the glorious game of Clue. The Prodigal Son invited me to play and gladly, I did. I followed the bread trail with no intentions of quitting until I figured out who did what, where, how, when and why. Just when I thought I had it figured out, Ms. McCullough played her final card with her element of surprise ending. She is a seasoned and enviable veteran of the pen. She knows her readership and, in my opinion, accomplished what she set out to do. She wrote an engaging, on-the-edge-of-your-seat story that her readership will enjoy from the beginning to its very end.

Quill Says: If you haven't already done so, it's high time you investigate one of Colleen McCullough's Carmine Delmonico novels.