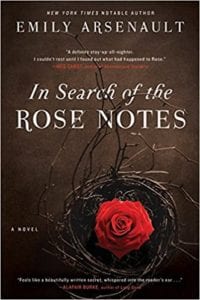 This story is wrapped around those fantastic Time Life books that used to be published, with those unforgettable black and silver covers; books that spoke about everything from myths to monsters that lined the end of the aisles in all the hometown grocery stores.

Charlotte and Nora are babysat by a beautiful girl named Rose. Rose is a bit quiet, some would call her “odd,” but the girls love her. In fact, each and every day after school they do a project of some kind, and talk about the incredibly strange worlds that Charlotte’s Time Life books cover. Nora is the more grounded one of the two best friends, whereas Charlotte is the outspoken one who takes notes and actually believes in most all of what Time has discovered.

One day, out of the blue, Rose and Nora leave Charlotte’s house and Rose walks Nora home. Then, as always, Rose disappears over the hill to get back to her own place. In the morning, however, Rose doesn’t reappear. In fact, she never made it home the night before. The crime goes unsolved in the community, with the “small-town” people chalking it up to a runaway. As far as they are concerned, Rose decided to simply move on.

Years later, Nora and Charlotte are living far apart. Nora went on to get married to a wonderful man and works as a pottery-maker, creating sculptures to sell at various arts and crafts fairs, as well as teaching her skill to others. Charlotte stayed back in the old hometown and became a teacher; the two best friends keeping in touch with hardly more than a yearly Christmas card. Until the day that the body of Rose is found, and Charlotte calls up Nora to tell her to come back for a visit. The police, who have found the bones nicely placed into a tote and sitting beside the river’s edge, want to question everyone from way back when about what happened before Rose’s disappearance, in an attempt to try and solve the crime.

Nora feels strange coming back home. The memories of Rose, and sitting around her now chain-smoking best friend who seems to have her own secrets, makes Nora very nervous. But as the two now-grown women begin to unearth the past, and a box that holds letters, notes, and the black and silver books, the mystery of what actually happened to Rose begins to appear before their very eyes.

This author has done a magnificent job of incorporating the resurrection of a friendship with a slightly “bone-chilling” tale of a young girl who was into far more than her hometown ever thought.

Quill Says: This is what one would call a beautifully written mystery that combines a ‘normal’ present with a haunting past. Enjoy!