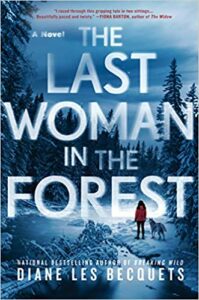 Main character Marian works for a program that tracks the populations of endangered species, using dogs to find and collect scat samples. She is a hard-working, career-oriented woman who stumbles into a romance with her co-worker Tate along the way. Though it isn’t the main point of the story, I enjoyed reading about Marian’s experiences with this program. The author takes time to paint a vivid picture of what is clearly an important part of her character’s life. It adds significant dimension to Marian throughout the novel.

Readers get to travel alongside Marian as Diane Les Becquets describes the lush and fascinating settings her job and research of Tate’s past take her to. She expertly weaves a creeping tension into her descriptions. The reader is always aware that something isn’t quite right, lending a spooky edge to an already eerie story.

The Last Woman in the Forest does an excellent job exploring the aftermath of trauma. As Marian begins to learn more about Tate’s past, she takes a serious look at her relationship with him. As she sifts through her memories, she comes to the shocking realization that their relationship was far from perfect. Diane Les Becquets does a phenomenal job writing a young woman working through the complex emotions that come with realizing she was in a relationship that was both toxic and dangerous.

The strongest part of this novel is its climax. Diane Les Becquets slowly builds up to a final, explosive confrontation between Marian and Tate that keeps her audience riveted until the very end.

There are a few drawbacks to The Last Woman in the Forest. As engaging as the setting descriptions are, there are several other instances where description is overused. Entire paragraphs are spent describing the simplest of actions, such as answering a phone call when the audience’s attention should be focused on more important happenings.

The mystery/investigation elements of the story were also difficult to believe at times. Marian isn’t a detective, and she does the best research she can with the help of a retired criminal profiler. I enjoyed their investigation of Tate a lot, and Marian’s uncertainty with the proceedings added a great deal of suspense to the plot. However, there are multiple points where everything goes a little too smoothly.

Marian gains a lot of her information by asking very specific, nosy questions about Tate, completely out of the blue, to people who were close to him. These people never question why she wants to know detailed information about his locations and activities during a very specific time frame. Very few people question her motives throughout the novel and easily hand over everything she needs to know.

The Last Woman in the Forest is an intriguing combination of thriller and trauma recovery story. It’s disturbing in very obvious ways in addition to much smaller ways that will catch its readers off guard.

Quill says: This is a great novel for anyone who wants to get into the mystery/thriller genre but doesn’t know where to start.