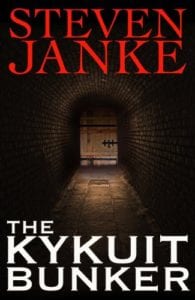 This book is a very action-packed and busy story. It begins with a phone call to a reporter, Taylor Bowman, at the New York Times. The caller is a Mr. Francis Campbell, former curator of the rare books and special collections division at The Library of Congress in Washington, DC. He tells Ms. Bowman of something that he had found, many years ago, while working on the loading dock at the Library before he started to climb the ladder of success. Ms. Bowman is not all that excited about the story but, as she is about to lose her job, she agrees to hear him out, hoping that she will be on to something that will keep her working for a while. Little does she know that this story will keep her going for quite a while. It will also keep several other people busy, namely three students from George Washington University and three sometimes quite inept CIA men.

The article regarding Mr. Campbell's discovery is printed in the New York Times and the reporter's facts are said to be documented, accurate and to the point stating that the clue names Winston Churchill and, that he presented some sort of treasure to America. The second clue is hidden somewhere within the Library. The story continues as the current Director of the CIA enlists three of his analysts to prove that the article is false and wants them to search for proof that there is no treasure. Told to discredit the information in the article they prepare a report to appease and please the director even though the evidence points to the fact the information might be valid. As the team heads to the Library of Congress, the truth behind their assignment is revealed and it is not what they were originally told.

Three college students at George Washington University read the same article (which is discussed in one of their classes) and decide to join the treasure hunters to find what everyone assumes Churchill left. As the story progresses it is found that John D. Rockefeller had been given a large amount of money printed by the U.S. Treasury.

As readers might expect, the kids are the ones who can solve the puzzle and find the second clue. They are on their way to a scavenger hunt that will bring them closer to the treasure, closely followed by the CIA analysts who will remind the reader of the Keystone Kops at one point. This is a great mix of fact and fiction that will keep you reading for many hours. A fun read full of American History and drama of the highest caliber.

Quill Says: The author takes us on a fun ride through a world full of secrets. If you are a lover of history or mystery you will find this book extremely believable at all times.