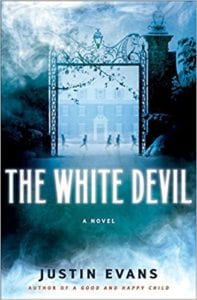 Adjectives to describe this book: Creepy, horror-filled, fearful, frightening...heck, this one's just plain scary. And, a fantastic tale of ghosts and goblins guaranteed to make you look in your closet and check each and every room of your house before ever even opening the cover.

A young boy, Andrew Taylor, is sent to Harrow School in England by his father - a wanna' be Southern aristocrat - because of all the trouble that he's gotten into in his American school. The Taylor's are quite an interesting family. Past generations include a Civil War Admiral who had a battleship named after him; as well as Andrew's grandfather, a stellar businessman who'd been president of a contact lens company called Hirsch and Long that'd made a small fortune in stock. The Taylor's came from Connecticut and were listed among the "who's who" of society until Andrew's father, who worked for American Express as a lowly vice president (due to his intense pretention and the way he treated his family), was passed over for promotion. After stock market problems caused the Hirsch and Long stock to tank, there was no prestige left to raise the Taylor's up to the snotty standards of Connecticut or New York Society. When the chaos grew, seventeen-year-old Andrew became a real problem, so Dad decided to send him off for his senior year to a prominent English school. At least that would give the Taylor's a few bragging rights.

Sadly, Andrew had only been at Harrow a short time when a student who'd shown him friendship died under mysterious circumstances. Andrew had come upon the body and called the authorities but, had seen something that was so "crazy" that he could find no way to explain it to the investigators. So...Andrew kept it to himself. From that point on trouble seemed to pursue Andrew and most of the boys began to see him as an outcast; they even thought it possible that Andrew was pushing drugs on campus. What they don't realize is that Andrew is stuck in a horrific situation that he can't talk about. A strange looking boy has started to appear at night in Andrew's dorm, leaving Andrew to conclude that he's slowly losing his senses. When he hears through the grapevine that his dormitory has been haunted for years by an odd-looking boy, things begin to turn from strange to all out creepy.

Soon Harrow is putting together a play about Lord Byron. It seems that Andrew bears a striking resemblance to the famous "looney" Lord, and ends up being cast in the leading role. Byron, who was one of Harrow's famous alumni, was a British poet and all-out scoundrel who was more than a bit strange, leaving Andrew to actually sympathize with the character. While rehearsing for the play, Andrew begins to discover very 'otherworldly' connections between himself and Lord Byron. And, soon, very horrific and scary events from the past start to interfere with Andrew's real life as he tries to unravel a literary mystery that is many years old.

All readers out there who are into ghosts and gothic thrillers will become immersed in this story and eat-up every word. Although the beginning set-up is a little dull, this fantastic author soon takes the reader by the hand and leads them through a maze of ghosts and unsolved crimes at Harrow, and readers begin to look over their shoulders to see if anything or anyone is back there watching their every move. This book is right up there with Stephen King's The Shining, which remains one of the scariest books ever written. This writer is truly gifted and, literally, scares you to death. A spectacular read!!!

Quill Says: A real nail-biter that will hold your interest to the very end. The only thing that's required is a very bright lamp, a watchful eye, and, as the mighty King once said, "check under your bed before you even start reading." Enjoy!