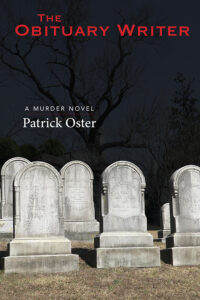 The Obituary Writer: A Murder Novel

Patrick Oster delivers a mystery novel that is simply impossible to put down in his newest offering, The Obituary Writer.

Wallace McRae, Mack to his friends, is a writer who is down on his luck. Once a respected journalist with "The Journal," when his wife Helen fell ill, everything changed. Mack resorted to drinking to deal with the stress and soon found himself without a job. Desperate to pay the mounting medical expenses, he took a job writing obituaries of famous people for the online company dead.com. His boss insisted that the more "dirt" an obituary have on the deceased, the better. It was disheartening work, the salary was low, but the job came with a free health insurance package.

When we first meet Mack, he's working on an obituary for Dieter von Gehlen, a doctor and chemist who was rumored to be in the running to win the Nobel Prize. The scientist was also 92 years old, and so Mack, and his boss, Anton Teufel, suspected that he might not be around much longer. Part of Mack's job was to write obituaries in advance of someone's death so the write-up could be uploaded to dead.com quickly. And because Teufel insisted on getting all the dirt, and the dirtiest dirt, on those famous people dead.com wrote about, Mack had some research to do.

Mack's research showed that von Gehlen might have a checkered past from his childhood in Nazi Germany so he kept digging. But von Gehlen, who was obsessed with his image, kept calling Mack to be sure the information in his future obituary be accurate. When the winners of the Nobel Prize were announced and von Gehlen's name wasn't listed as a winner, he called Mack, but not to complain about the award. Instead, he asked Mack to meet him the next day because he had "something important" to share with the reporter. But Mack would never meet the scientist as von Gehlen was found dead shortly after making the phone call...

The police quickly concluded that von Gehlen's death was suicide but Mack wasn't convinced. A few things just didn't add up for him and so he kept investigating. With the help of a detective from the local police force, as well as von Gehlen's attractive (and much younger) wife, Mack is convinced that the scientist was murdered. But as Mack closed in on the truth, some very nasty people started closing in on him. If he wasn't careful, Mack might end up just like von Gehlen.

While I was initially wondering just how interesting a novel about an obituary writer could be, I must admit that this is a story that sucked me in quickly and kept me interested throughout. Wallace McRae/Mack is a relatable protagonist, with a messed-up life, who is trying his best to straighten things out. He's loyal to his dying wife, but also tempted by several lovely ladies he meets along the way. And while we discover who the murderer is about half-way through the story, the reader is kept guessing as to who is pulling the strings, paying the bills, and why they're doing it. Some computer and phone hacking is involved, as is good old-fashioned surveillance, and the author does an excellent job of explaining both so that even "computer-challenged" readers will understand. If you're looking for a satisfying murder mystery, check out The Obituary Writer. Let's hope that this isn't the last obituary that Mack writes!

Quill says: A thoroughly enjoyable murder mystery with a main character who is fun to cheer for. I hope we meet Wallace McRae in future books as he writes up more obituaries!

For more information on The Obituary Writer, please visit the author's website: www.patrickoster.com