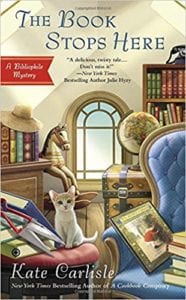 Brooklyn Wainwright is at it again – and this time she's thrown into the middle of two mysteries. With characteristic wit, author Kate Carlisle has written yet another fun mystery that keeps pages turning till the very end.

In The Book Stops Here, the latest in the Bibliophile Mystery series, protagonist Brooklyn Wainwright has been asked to appear on a national antique appraisal show that has traveled to her neck of the woods. “This Old Attic” will be filming in San Francisco for several weeks and they want her to act as the rare-book expert/appraiser. Nothing makes Brooklyn happier than talking about books so she happily agrees and is thrilled when the first book she gets is a first-edition of The Secret Garden.While taping the segment for the show, Brooklyn tells the book’s owner, Vera Stoddard, that the book is worth at least twenty thousand dollars! Vera is speechless, thrilled almost to tears. Having just bought the book a few days earlier for three dollars at a local garage sale, Vera can’t believe her good fortune.

When a teaser airs for the show, Vera’s book is the lead and it gets the attention of a big, burly brute who wants the book. Accosting Brooklyn in the studio parking lot, he insists the book belongs to him and he will kill anyone who stands between him and the book. When Vera winds up dead on the floor of her flower shop, it seems like it will be easy to find the killer. Alas, things are never as easy as they initially seem and that holds true for searching for Vera’s killer.

At the same time, Randolph Rayburn, the host of the show, is convinced that he has a stalker. Other employees at the studio think Randolph merely has an overactive imagination, but when strange things start happening, escalating in their severity, people start taking him seriously. Could the murder have something to do with Randolph’s stalker? Brooklyn needs to find out what’s going on, and fast(!) because most of the attacks seem mistakenly directed at her.

I haven’t read any of the other books in this series, but that didn’t keep me from quickly getting up to speed with Brooklyn, her hunky beau Derek, old friends and her new friend Alex, as well as her talent for restoring books. The author’s love of bookbinding and her experience in television come through clearly in the writing, making everything vivid and realistic. The story was face-paced and quite enjoyable. If you love cozy mysteries, check out this series.

Quill says: A satisfying cozy read that left me anxious for the next book in the Bibliophile mystery series.