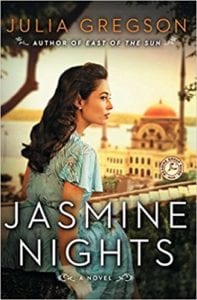 Set during World War II, this story is beautiful in some areas and really sad and hard to take in others. The story centers around Saba Tarcan, who is in her early 20's and is looking forward to a singing career. She lives with her family in Cardiff, Wales and it is certainly not a really interesting place. Saba feels like most of us felt when we had to get away from the hometown and seek greener pastures. As Saba is traveling around Britain, singing for wounded soldiers, she meets Dom Benson, a fighter pilot who was burned badly when his plane crashed. They have started a relationship when she is asked to audition for the Entertaiment National Service Association that sends entertainers to places in Egypt and Turkey to give shows for soldiers who are fighting in the North African desert.

Much to her parents dismay, Saba signs up with the Association and, leaving Dom behind, she heads off to perform in Cairo. After a recovery period Dom is again able to fly and, in spite of the dangerous missions, he refuses to be grounded and goes back to combat flying. For her part, Saba is very happy in her chosen profession.

Saba is soon contacted by the British Secret Service in the guise of an agent, Mr. Cleeve. Cleeve asks Saba to take part in a secret mission but she will have to conceal her part in the mission from her friends at the Association and Dom too. She is sent off to Istanbul to spy on a very rich Turkish gentleman who is associating with the Germans and doesn't realize that this could be her last gasp because her mission has been kept secret.

Saba and Dom meet again but now they argue all the time. Saba refuses to give up entertaining and Dom wants to go up into the wild blue yonder - they never seem to be able to think alike. There is much time to go yet in the war and these two people want to keep working to help out their countrymen. The story is a well-written one that doesn't make the war years seem like some big love story. Bad things happened to good people, just as in real life, and the reader will appreciate the fact that things were not always rosy in Europe and North Africa and all the horrible places where these young people had to work. This is a powerful account of one such couple.

Quill Says: Checking into some of the entertainment associations during the war, there were many stories of female entertainers who were asked to be spies. This is a story of one such singer (fictionalized) but sadly, the story holds true in what it was like for these women.