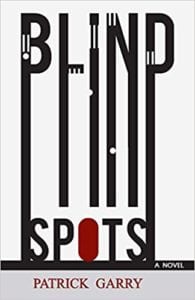 Blind Spots, by Patrick Garry, was another well-written and intriguing read by the author of the award-winning Finding Flipper Frank.

In this most recent book, Garry takes the reader on an edge-of-your seat journey through the convoluted workings of inner city protections and politics, a somewhat skewed judicial system and then into the mind of an 'honorable' man doing what he believes to be the right thing. Yet, what exactly is the 'right' thing when the country has just been presented with the death of a mother and her three young children; shot to death in their own home.

The community is in an uproar and the police are making arrests by the drove. Detective Gunther Mulvaney has just arrested Milo Krantz – hated rent collector for an inner city slumlord. After questioning Miles extensively, Detective Cuther Mulvaney doesn't believe he’s the murderer. There's just a single hole in Mulvaney’s hypothesis though – at some point during Miles' night in jail he decided to confess to the murders; and then refused to defend himself. Things that make you go hmmm, right? Especially during shady proceedings where it seems the Police Department is more intent on locating a quick scapegoat to pin the murders on versus searching for truth so as to mete out justice.

I don’t want to give any additional story plots or action away, but suffice it to say that Blind Spots was almost impossible to set down. While it did have a slower start, due to necessary character introductions and additional plot twists, Garry more than made up for it as the tale progressed. Interesting, believable and well-written, Blind Spots was a masterfully woven web of psychological drama with more players, and twists, than the reader might expect.

Quill says: A page-turner of a crime thriller with some surprising twists and turns...

For more information on Blind Spots, please visit the author's website at www.patrickgarry.com/books/blind-spots