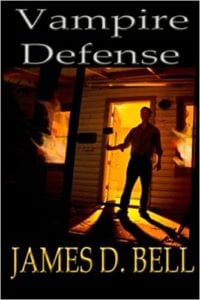 Retired Judge James D. Bell delivers a captivating tale in his debut novel, Vampire Defense. In the opening scene, Mr. Bell hooks his reader with the nuance of an evil that lurks in the small Mississippi town of Belhaven. Young Patrick Simmons takes on a dare from his buddy Jack Robins to go up and knock on the door of a creepy and worn, ninety-year-old Victorian house. Little did they know as he approached the house, the two boys were about to witness a horrific event. All they wanted to do was see if that house really was haunted. As they lay their bikes down and begin to cross the street, two cars come careening around the corner. Scared, the boys jump back into the holly bushes for cover and watch the horror unfold before them. When the first car comes to a screeching halt and a man jumps out of his car he fails to close the door as he runs around to the front of the car. Close behind, the second car crashes into the door and the boys witness it fly off its hinges before it comes to rest at the curb. It is when the short dark man jumps out of his car; Patrick realizes it is ‘Got Fried,’ Godfrey Plova, the creepy house's home owner.

The blonde-haired man from the first car, Hal Boyd, jumps Godfrey and a vicious fight ensues. Paralyzed, the boys take further refuge in the holly bushes; hoping they are not seen. As neighbors began to gather a shot rings out. Godfrey is dead and Boyd races toward the house, kicks the door in and disappears into the darkness. Moments later the once quiet street is flooded with police cars, witnesses, and the image of the majesty of that Victorian mansion engulfed in flames. Seconds later, Hal Boyd is walking out of the flames and down the steps toward the gathering crowd and turns himself in to the authorities; but not before confessing he killed a vampire. Shortly thereafter, Bell introduces his star character, attorney John Brooks. When Brooks realizes he will be defending a man who killed another, confessed to the killing and did so because he believed he was a vampire, Mr. Bell cleverly uses his wealth of legal knowledge and experience and works a believable insanity defense into the story’s premise. At the onset, Brooks is handed a fair amount of ridicule not only from his community, but national news coverage as well because of his Vampire Defense. However, this is the least of his concerns as a series of unfortunate events continue to unfold.

Mr. Bell has done a fantastic job of seeding a multitude of twists and turns to this story, but nowhere is the reader ripped off with cheeky dialogue or ridiculous situations. With his vast knowledge of the legal process and jargon, Bell takes the reader on an adventurous tale that translates into pure entertainment. He has done an excellent job of plotting out his story from beginning to end. For a debut novel, there is nothing novice about this story. I applaud Mr. Bell for his passion in the writing of Vampire Defense. If this is any indication of the writing he has in store for us, I would venture to say he will be as equally successful with his writing as he was in his admirable legal career. I look forward to (hopefully) the many stories Mr. Bell shall pen in the years to come.

Quill Says: Grab yourself a V-8 and sink your teeth into Vampire Defense. You won’t be disappointed.