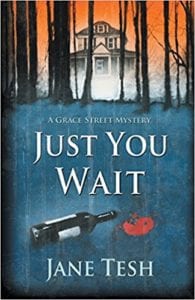 Just You Wait is the fourth book in the Grace Street Mystery series, and – it was yet another fun read by mystery writer Jane Tesh.

In this episode, Randall (one of the series’ main protagonists) still resides at 302 Grace Street, as does the complete cast of the previous Grace Street Mystery books. With regard to Randall, being a private investigator means that life is never boring, however there are times when it can be considered ‘slow.’ This barely active period is where the reader, upon starting Just You Wait, will locate Randall.

However, due to the fact that private investigator work is generally feast or famine, Randall isn't idle for very long... A well-known and much-loved actress with the local theater has been missing for several days; there have been a slew of oddly strange, shoplifted items at the neighborhood drug store, and last, but not least, BeautiQueen Cosmetics business owner, Mrs. Folly Harper’s business partner, George Mark McMillan, has run off with a sizeable chunk of money. Mrs. Harper desperately needs Randall to locate him for her.

Camden, the Grace Street house owner (and one of Randall's housemates) is also having significant troubles... His psychic abilities are on the fritz; he has now added telekinesis to his repertoire of unusual talents; and he's trying to stay true to his personal values while still attempting to marry his fiancé.

And, like always, much is not what it seems to be in the small town of Parkland... Viola, the missing actress, has at last been located, but, sadly for her, she was found dead and buried in her home's basement. The mysterious drug store thief has unfortunately, or fortunately, disappeared without so much as a trace, and George McMillan (Mrs. Harper’s business partner), for reasons unbeknownst, has apparently run away to Florida.

With that said, I’m not going to ruin the plot of an intriguing mystery, or three, but I will tell you that Tesh has once again penned a wonderful and riveting suspense which will assuredly keep the reader guessing until the very end.

Quill says: Anyone who loves a good mystery will enjoy Just You Wait and, due to Tesh's tasteful writing style, Just You Wait can be enjoyed by readers of all ages. In summary, another great read by a mystery writer who is certainly qualified to rub shoulders with Agatha Christie.