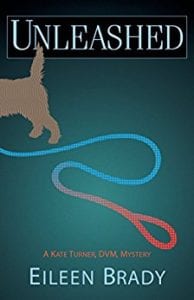 Dr. Kate Turner has settled into her routine in the small town of Oak Falls, New York working as a relief vet for old Doc Anderson who is jet setting around the world. Each morning starts with a cup of coffee, a quick review of the day’s appointments and then she is off to make house calls. Of course the routine cannot stay normal for long...

In this newest offering in the Kate Turner, DVM mystery series, it seems that after the last murder Kate accidently solved, she finds herself in the midst of another crime when a client of hers named Claire Birnham is found dead in her car. The police are claiming it was a suicide but just a couple days before, Claire’s dog Toto had gotten sick and was taken to the clinic where Kate worked and the morning of the apparent suicide was the day Claire was supposed to pick Toto up. Kate knows this thought is a long shot but she can’t help but think that Claire would never leave Toto without someone to take care of him, as she loved that dog with all her heart. Claire also had exciting new plans starting in her life, a new job in Manhattan, and a new apartment, so why would she commit suicide when everything seemed to be going her way? Kate can’t shake the feeling that this was not a suicide but a murder.

Against the wishes of her Gramps and local police officer friend Luke Gianetti, Kate decides to start asking questions as of course in a small town gossip runs rampant so she is bound to come across some piece of useful information. It turns out Kate gets much more information than she bargained for, unfortunately, however, she finds no real concrete clues to help her solve this mystery. She does discover Claire’s former rock singer boyfriend held quite a grudge when they broke up and that this singer’s current girlfriend was jealous of the fondness he still held for Claire. Then there is Claire’s alcoholic mother and dead-beat boyfriend Buzz whom Claire never got along with and apparently Claire had quite a life insurance policy that these two might have been trying to get their hands on. Now, suddenly Kate has a whole slew of possible suspects who could have a motive for murder but the police only want hard evidence not just speculation so in reality Kate really has nothing to go on. However, when young Eugene, an employee of Kate’s, becomes a suspect in Claire’s murder Kate knows that she must do everything in her power to clear his name for she can’t let someone innocent go to jail for this crime.

After absolutely loving the first book by Eileen Brady, Muzzled, I was excited to see that she had written another one and I was not disappointed. Working as a veterinary technician I enjoy all of the veterinary aspects that are included in these books and laugh at all the humorous and unexpected things that can happen in a clinic. Brady does an amazing job of combining a page turning mystery and the humor involved in working with animals and always has me guessing until the climatic end.