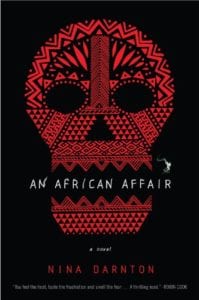 The gentle winds wafting across the Sahara Desert can slowly drift across the Atlantic Ocean only to become full blown hurricanes when they touched land. The seeds of another sort of hurricane were brewing in Sub-Saharan Nigeria as the lifeblood of William Agapo and his wife were drained by the knife of an unknown assassin. The authorities claimed it was a robbery, but was it? Agapo was the "most valuable agent" in Lagos and any fool could see there was much more to his death that a simple robbery when expensive jewelry was left behind. Figuring out whether it was the signature of local operatives or Solutions Incorporated could be tricky.

Lagos CIA agents quickly gathered together to brainstorm and attempt to set in motion new contacts. "We'll get along fine, won't we Dave?" Vickie Grebow and Goren would now work together, like it or not. A quick move would put her in place as the embassy's deputy political officer to check out General Michael Olumide, Nigeria's current drug running military dictator. Few people looked toward Nigeria as the place to be, but journalists from around the world were there looking for that plum story that could net them a Pulitzer. Lindsay Cameron worked for the New York Globe and finding that plum amidst all the corruption wouldn't be that easy.

When Lindsay had first arrived she headed to Ikoli, where most of the ex-pats were. Her friend, Maureen, was new to Africa, but was a long-term friend. Linds told her that when they drove, "the houses got bigger and nicer, but the smell never changed and the garbage mounds were just as high." The place had its own distinctive perfume with human excrement as its number one ingredient. The sounds of discontent were equally distinctive with shouts of mobs as they called for Olumide's downfall and the rise of Fakai. Lindsay had scored an interview with evil. Kofi Ransom, who was missing, claimed that "if you are walking in the forest and you see Olumide and a python, kill Olumide first."

Bodies seemed to be cropping up everywhere, including that of Babatunde Oladyo, one of Fakai's supporters. Lindsay had plenty of questions for Olumide, but was he going to answer them? His reputation of cruelty and deceit were well-known, but he didn't know just how persistent she could be. With a country in turmoil James Duncan suddenly stepped into her life, a life that had no room for someone who "didn't like competing with breaking news." People were dying and she had to figure out what was going on. "The lion be juju. You rub head and make prayer. It give you power." Was any amount of power going to help her if she stepped into the fray and headed to "The Next Step," the "Juju House?"

This is an amazing tale of political intrigue in the tumultuous landscape of Nigeria. Although this book is widely touted as a thriller, I found it one whose nature was more pensive, intellectual, and ultimately more believable than the standard cliffhanger. I was riveted by the historical vignettes interwoven in this fictional tale. Lindsay, who was feminine, yet strong, was an in-the-trenches journalist who brings Nigeria alive for the reader. For example, many statements were quite striking: "She was grieving for the agony of the country, the everyday brutality of life here."

Quill says: Nina Darnton's debut novel is a stunning portrayal of Africa that will definitely have a place in the post-colonial African literary scene.