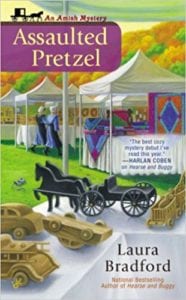 Claire Weatherly had only been in Heavenly, Pennsylvania for about eight months after her divorce. It wasn’t easy to leave her old life behind, but her aunt Diane welcomed her to Amish country with open arms. The Heavenly Inn, Aunt Diane’s inn, would be her new home. Claire had already set up a gift shop, Heavenly Treasures, and made new friends. It was now what she had to look forward to that really mattered, not the disappointment of her past. Claire was planning on going to the Amish Food Festival that night, but was pleasantly surprised when Melinda Simon, a guest at the inn, had an announcement to make. Apparently Rob Karble, of Karble Toys, was going to introduce a new line of toys, “Back to Basics.”

It would be an exciting opportunity for the residents of Heavenly, especially for Daniel Lapp who already produced Amish toys. The whole town was excited about the venture until they found out just what Karble had up his sleeve. Yes, there would be an Amish line of toys, but no one in Heavenly was planning on working in Grand Rapids on an assembly line. Claire’s surprise turned to shock and disappointment at the discovery. Detective Jakob Fisher, who’d been excommunicated from the Amish community when he decided to become a police officer, learned of the new development along with Claire when they went to the festival.

Ann and Rob Karble had been fighting in the evening, but it finally began to dawn on her why there was turmoil. Benjamin, an old rival of Jakob’s, confirmed that Karble had apparently taken “pictures of Daniel and Isaac’s work.” Isaac, Jakob’s brother, had even shown him specialized plans. It definitely looked like Karble was no more than a thief. It soon looked like there would be even more trouble in Heavenly when Esther King found a body. Rob Karble could no longer steal from anyone ... “a half-eaten pretzel found inches away from a blood-soaked rock” next to his corpse ended it all. There was a mysterious note that could be the answer to his death, but would Claire be able to find out before someone else died?

Everything is anything but heavenly when murder once again visits Heavenly, Pennsylvania. I’ve read both books in the series and find that Laura Bradford definitely captures the gentle nature and spirit of the Amish in her work. The complications of Jakob’s excommunication and how the Ordnung works are covered more thoroughly in Hearse and Buggy, but I still find the tension between him and the members of the Heavenly Amish community interesting. When Esther cries out, “But killing is wrong! For any reason!” we learn a lot about the philosophy. Claire is a more than capable sleuth, one that I’ll be watching for some time to come. Is there chance for a romance? There is one man she can never be with and another pushing her away. This is one fascinating series that has a lot of promise and loads of intrigue.

Quill says: This is an exciting new series that definitely is one of the most exciting and intriguing I've seen in some time!