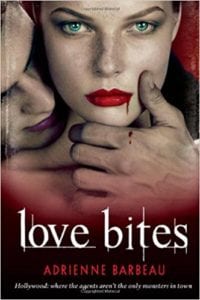 Vampyres of Hollywood was the first book to introduce readers to these wonderfully quirky, funny, out-of-this-world characters who dance attendance around Ovsanna Moore. Ovsanna is THE Hollywood Scream Queen; she’s been in many horror film “hits” and “flops”; she has her own movie studio called Anticipation; and, of course, she’s in her four hundred and fifty-first year of life. Yes, friends, Ovsanna is a vampire. In fact, now that she’s taken care of her arch-enemy she has become, literally, the mother of all evil – the most powerful vampyre in North America. She also is the owner of Los Angeles. You see, in the Liber Mortis – the vampire bible – it states that the first to inhabit a township that’s greater than nine-hundred and ninety-nine souls is the legal owner of that area, and every vamp has to pay Ovsanna to live there.

As we begin our story, Ovsanna and Detective Peter King have just finished up with the destruction of a murderer, during which Peter found out exactly what Ovsanna is. Of course, instead of running for the hills or carrying a cross around with him, he decides that he’s beyond attracted to the vamp and asks her over to his family’s house for Christmas Eve dinner. Before the strange holiday feast, Ovsanna meets up with a werewolf who has come on to her property in order to take her out; not to mention some pretty “odd” paparazzi who seem to want to get a heck of a lot closer to her than the normal photog stalkers. On top of all the weird ones showing up on her land, Ovsanna also has to deal with her friend/personal assistant/sometime love, Maral, who has brought back a drug dealer to the homestead and is chanting in ways that makes Ovsanna wonder if her very best friend in the world is trying to take her out.

On Peters’ side, he’s a divorced man who has a renter living in the guesthouse behind his home. Her name is SuzieQ and she’s been his closest friend since his split with his wife. Not only is SuzieQ a tall, blonde valkyrie, but she also spends her time on movie sets as a snake wrangler who starred in one of Ovsanna’s movies titled, Bride of the Snake God. Peter’s family seems to be the only other group of people in the story who are semi-normal. The family business is King’s Catering and they love Ovsanna. In fact, Peter’s mom remembers the time when they catered food on the set of The Twilight Zone and had met Ovsanna’s mother who she looks SO much like. (Of course, Ovsanna is her mother – just reborn.)

Soon bodies begin appearing in L.A. once again, and the werewolf attacks are on the rise. It seems that everyone in the City of Angels is after Ovsanna’s dark soul, and only Peter King can seem to help her solve the mystery of what, exactly, is going on, and who Ovsanna’s real friends are. On top of all that, the attraction that she and Peter are feeling for each other is becoming harder to resist than the smell and taste of the “red stuff” that makes Ovsanna “tick.” The romance, intrigue, mystery, and – a great deal of humor – make this an absolute “must read” for any commercial fiction fan.

Not only does the mystery hold the reader, but the “cameo” appearances from the actors and actresses of “yesterday” are absolutely hysterical. Orson Welles is a vampire disguised as a rat; Mary Pickford comes back with short hair and looking like the next Cyndi Lauper; Tyrone Power wants back into the industry and changes into his new shape of a black panther; and, Marilyn Monroe is offering consultations in the local cemetery. All of the Hollywood A-list is back in action, just waiting for when they can hop back on to the screen and start all over again. These legendary Vampyres of Hollywood are called upon by Ovsanna to band together and fight the new supernatural beasts that are tearing up “Tinseltown.”

Quill says: Adrienne Barbeau has been a film, television, and Broadway star for years, and I, for one, am absolutely thrilled she added author to her repertoire. Her characters are unforgettable and, in a world that seems to be vampire crazy, she has the creativity, humor, and talent to have created a “bloodsucker story” that is completely different – not to mention far better – than the rest that are lining the shelves. I can’t wait to see what Ovsanna and her posse does next.