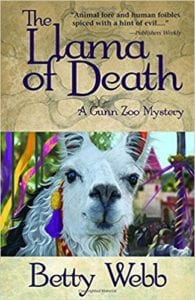 The first line in this new Gunn Zoo Mystery is a real deal-breaker. “Alejandro, you spit in my face!” This is the perfect retort to a Llama who is just slightly miffed by his zookeeper. Alejandro, a Llama who resides at the Gunn Zoo, is the favorite of children who love to ride on the lovely white beast and are not the recipients of his nasty attacks of spitting. The zookeeper, Theodora “Teddy” Bentley had been asked by the owner of the zoo to take Alejandro to the Monetery Bay Renaissance Faire and Alejandro, who loves children, is having a ball. Teddy, unfortunately, not so much. It’s not as if Teddy has nothing else to do besides baby sit Alejandro, she also has a weekly program called “Anteaters to Zebras” on local TV and still has to clean animal cages and feed the animals at the zoo. To make matters worse, she has to dress up in medieval clothes which do not do a thing for her, and lead Alejandro around while he gives children rides. As mentioned before, Alejandro adores kids but because Teddy has a face full of spit, she has different feelings about such affairs.

One night Teddy is jolted awake by the terrified screams of Alejandro. Running to Alejandro, she finds the body of the Reverend Victor Emerson in the Llama Rides area and thinks that the Llama has stomped the man to death. Closer examination by the police show that the man, who was dressed as Henry VIII, was killed by a crossbow dart to his neck. This vindicates Alejandro and sets an investigation in motion. Teddy’s fiancé, who just happens to be the Sheriff, is away on a National Security job and so the deputy is handling the case and, I might add, not very well. The Acting Sheriff has arrested Teddy’s much-married mother and charged her with the murder. Teddy is bound that her mother not go to jail for a crime she did not commit and starts her own investigation. She comes up with a very long list of suspects and the killer is keeping an eye on her. Teddy’s father, who is a convicted felon living in exile in Costa Rica, flies in to help Teddy and her mother which messes up the case even more. At one point, Teddy herself is handcuffed and hauled to the lockup. This is an extremely dysfunctional family!

This author has previously written two other Gunn Zoo Mysteries, both set on the coast of California. These stories feature a great story and some humorous scenes that readers will be able to relate to. Also, there is a lot of really good information on all kinds of animals to please the animal lovers of the world of which I am one.

Quill Says: Alejandro is a beautiful animal but having been on the receiving end of Llama spit a couple of times you really have to learn to duck. This book is a great read for both mystery lovers and animal lovers alike.