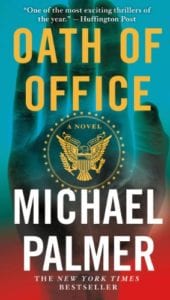 This book is a real shocker, written by a stellar author who will keep you on the edge of your chair until the bitter end. It starts out very rapidly in a doctor's office. A very honored physician in a town near Washington, DC, goes on a violent rampage in his office and, before he's through, he fatally wounds his staff, his associate and two patients. Then he turns the gun on himself while, all the time, he is shouting the words: No Witnesses.

The doctor, Dr. John Meacham, was a respected member of the medical community, who had lost his license and been suspended for alchoholism in the past and losing his temper with a patient who didn't follow his instructions. A colleague, Dr. Lou Welcome, had worked with Dr. Meacham in the past, through an organization called "Physicians Wellness Office" and had helped Dr. Meacham through his problems and sent him to AA meetings and psychiatric visits until finally, Dr. Meacham was able to return to the practice of medicine. When Dr. Welcome heard the news of this horrible slaughter in his colleague's office, he was in shock as everything had been going so well for many months for Meacham, who had shown real progress.

After the rampage, Dr. Welcome was helping Meacham's wife and offered to take her home after viewing her husband's body. On the way, Mrs. Meacham began to develop some very strange symptoms and almost caused an accident on the highway because she was chasing a car that had a broken tail light. She was definitely out of her mind for a short period of time and Doctor Welcome decided to look into these strange occurances to see if there was something in common that sent these perfectly normal people into homicidal rages in seconds.

When Dr. Welcome starts his investigation he finds a horrendous conspiracy that will lead him to some very wealthy people and also might include the leader of the free world at the White House. As the book states: All people in authority including the police, the president of the US and doctors, take oaths to protect, to defend and to obey. These individuals swear oaths to the public but, unfortunately, some will break their oaths.

Mr. Palmer has written numerous books surrounding the medical profession and really knows his subject. This book is an eye-opener when it comes to keeping said eye on the people who are in charge of the country's health and the lives of it's citizens.

Quill Says: A definite keeper that will start the public guessing about the people who are in charge and what their responsibilites are to the human race.