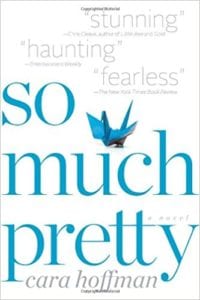 This has to be one of the creepiest books I have ever read yet, believe it or not, it was almost impossible to put down. Taking place in a small town called Haeden, located in New York state, So Much Pretty is a very sinister and angry story of denial by residents of this small town who know all about the events that have occurred but absolutely refuse to accept or discuss them.

Wendy White was a nice country girl who had just moved out of her family home to try independence on for size. Life was good; she had her first real boyfriend and was working her first real job as a waitress at a local bar when she came up missing. Progress by the local police in solving her disappearance doesn't happen and gradually things go back to normal (or a reasonable facsimile) and the case remains unsolved.

Stacy Flynn is a reporter who has moved to Haeden from Cleveland, which was heavy with violence and crime. The "bad side of life" is the last thing that Stacy thinks will be a part of her world in the hamlet of Haeden. After all, this is a small town where a dairy farm is the main employer. However, the population of Haeden is made up of families who have lived there for years, and the last thing they want is for an outsider to come into their community and "mess" things up...which is exactly what Stacy is about to do.

As she begins working on a story of the environmental impact of the farm, and how runoff from the farm is likely to poison the people and animals who live on the edges of the town, things begin to unravel for the small town and their best kept secret comes to light. Five months after Wendy White disappeared, her body turns up in a ditch near Haeden, and all of a sudden Stacy has another story to investigate. Nobody in town is anxious to speak with her, and the residents who do state unequivocally that Wendy's murderer is definitely not a local. As Stacy delves into the environmental issues and Wendy's disappearance, she starts to become suspicious of the town and it's people.

Alice Piper is fifteen-years-old and the daughter of two doctors who left New York City to settle in a rural community to raise their daughter. She is an extremely bright girl with a genius IQ and is very popular with the locals ever since her family moved to Haeden to give her a better life. An accomplished swimmer, Alice remembers Wendy White from the swim team at school, and she also harbors her own suspicions of the murder. When Alice reads the story that Stacy has written concerning violence against women and the number of women who are murdered by people they know, she begins to mull over the facts about Wendy's death, and decides she wants to get involved and solve the crime instead of overlooking it like the rest of the town seems to be doing. Stacy and Alice begin to notice the towns' failure to own up to the murder, and when a second crime is committed, Alice and Stacy find their lives becoming twisted together as they begin to wonder which one of them could perhaps be the next victim.

This story, being more than a little confusing, will make the reader go back and forth - at times liking the plot and then disliking it, depending on the chapter. As a debut novel, there was a ton of thought put into the story and characters, which were certainly true to life where small town communities beliefs', loyalties, and politics are concerned.

Quill Says: An intelligent and imaginative look at small town life and the ability to overlook the obvious when it suits your purposes.