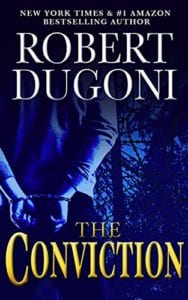 Not a lot of authors are able to write a legal thriller that is as lively as this new novel by Robert Dugoni. In the beginning you are ready to sit for an all-day read and, by the last page you are on the edge of your chair waiting for the next shoe to drop.

Lawyer David Sloane’s teenage stepson, Jake Carter, is a very troubled young man. He has gotten into many scrapes since he witnessed the murder of his mother, who was Sloane's wife. Sloane has made a great effort to move on and is starting to live his life again. Jake, not so much! When Jake is arrested for the second time, Sloane and Frank Carter, Jake’s father, persuade the court not to jail him. Then, in an effort to turn Jake around, Sloane and his friend, police detective Tom Molia, plan to take Jake and Molia’s son TJ on a camping trip in Trulock, California.

Sadly, Jake can’t seem to stop his old ways and the two boys are captured breaking into a store trying to get Jake’s driver’s license back after it was taken by the owner of the store. In court, Winchester County Judge Earl Boykin gets guilty pleas out of the boys without benefit of a lawyer. He sentences them to six months at “Fresh Start,” a Winchester County-owned wilderness boot camp where teens are known to enter and never leave alive. When Sloan and Molia fight the conviction, they find that the Judge bends the rules a lot and is never questioned about his courtroom decisions.

Meanwhile, Jake and TJ are committed to a life of hardships that they didn’t expect and it seems that Fresh Start is there for a different reason than just rehabilitating unruly teens. As Sloane and Molia fight the conviction of the boys they learn that the townspeople are living in some sort of fear that is much more dire than Judge Boykin’s habit of picking on the kids of poor parents that cannot fight back. While this is going on, Jake and TJ find that Fresh Start has another purpose than taking care of wayward boys.

The storyline from here on is somewhat improbable but, really interesting and is filled with action and courtroom antics that will surprise the reader.