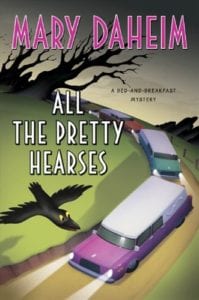 Judith McMonigle Flynn is having one heck of a time at Hillside Manor, her Bed & Breakfast inn.  She has to contend with a guest who checks in and then disappears, a couple caught fleeing out a window, guests who fight (loudly) with one another, a horse that is left on her doorstep, and oh yes, we mustn’t forget her husband Joe who has been implicated in a murder.

As the story opens, Judith is prepping for incoming guests.  She has a ridiculous number of special food requests from the Paine family, a family who won a stay at the inn through an auction donation that Judith made, and soon comes to regret.  While getting ready, she’s surprised to see her husband Joe walk through the door.  He was supposed to be working on a case, following a possible insurance scam artist, but when the man is shot, well, theres no longer anyone to follow so Joe comes home.  The trouble starts when the police discover that Joe’s gun is the murder weapon.  Joe is arrested and Judith tries to come to his rescue but with her grandmother screaming at her for all sorts of things, multiple guests arriving at the inn, and then yes, that horse again, who mysteriously drops dead, Judith has more than she can handle.

All the Pretty Hearses is not an overly long book and I can usually get through a cozy mystery like this in one or two readings.  But this book took me a full week to get through as I kept putting it down.  Judith was a bit of a wet towel who kept getting dumped on by everybody around her.  Her mother was incredibly mean to her (why is it funny to pretend the brakes on your wheelchair are broken?) and I really disliked her.  In fact, there weren’t many likable characters in this book.  The murder mystery is at times overshadowed by the numerous hijinks going on at the inn which got silly and rather unbelievable.  If you have guests climbing out of second story windows to avoid paying their bill, maybe it’s time to close your inn!

This is the first in the Bed-and-Breakfast mysteries that I have read and this is definitely one series that you can’t jump into in the middle.  There is very little background information on the main characters which made the storyline a little hard to follow at times.  Add in the confusion of the various (too many) subplots with guests at the inn and trying to figure out who/how/if they were related to the murder, and this story became quite jumbled at times.

Quill says: Fans of the B&B series may enjoy this book but others may want to try another cozy mystery series instead.