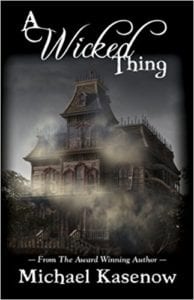 Michael Kasenow delivers a masterful thriller in his latest novel, A Wicked Thing. This is a thriller that addresses the innocence of good as much as the consequences of evil.

In the quaint maritime province of St. Martins, New Brunswick, Gwen and Stephen Burns have a good life—near perfect, actually. Between their thriving real estate business, the handful of cabins they own and rent and Gwen’s ghost tours, the notion of ever retiring simply wasn’t an option. It seems Gwen was a strong believer in the afterlife and there was plenty of that to be found when the fog rolled in most nights near the Bay of Fundy that fronted their property. Stephen Burns, on the other hand, didn’t believe in ghosts. Most nights he was content to ignore such nonsense and opt for his easy chair with a good read—often the likes of a novel by Robert Louis Stevenson. Quiet was about to change for the Burns.

St. Martins effortlessly delivered up many perfect blue sky days for summer beach dwellers. When a young boy and his mother happened upon Jonathan McAllister face-planted in the sandy shoreline, curiosity roused the boy’s imagination and he asked his mother if Jonathan was one of those beach bums as they passed by. Hearing the boy’s comment, Jonathan sat up and looked around. Dazed and confused, he couldn’t remember how he got there. What was more troubling was he had no idea where ‘there’ was. He shook off the night; picked himself up and set off in the direction of what he hoped would be town. He heard the voice of Ian McLaughlin before he saw the man, perched on the porch of the turn of the century Victorian. After a brief conversation and coming to the conclusion Jonathan needed a job and place to stay, Ian pointed him in the direction of the Burns. Maybe being here was a destiny; especially after the death of his wife and two sons. With the prospect of a place to stay in trade for some handyman work for the Burns, perhaps this was where he needed to be to sort things out over the summer ahead.

St. Martin was about to lose its innocence. Stunning, redheaded, blue-eyed beauty Tara Walsh was declared legally insane after she satiated the appetite of an industrial wood chipper with the likes of her husband. According to Tara, the two horrific years of marriage to her brute of a husband Charley was the most frightening experience of her life. Fact of the matter was nobody knew for sure if Charley was the awful beast Tara described. No matter, all she ever wanted from Charley was the endless acres of timber he owned and the money that went along with it. On trial for his murder, she knew exactly when to turn the waterworks on for the jury as much as when to toss a sultry glance toward the judge. In the end, nobody bought any of it as she was found guilty and insane before being shipped off to the sanitarium. St. Martins was going to regret that decision for a very long time to come.

Michael Kasenow is a master of the pen. He demonstrates this once again with his signature and fluid style. I had the pleasure of reading his previous book, A View From the Edge, and experienced an instant connection with his work. Such was also the case with A Wicked Thing. Mr. Kasenow deserves big props because it is clear to this writer; he knows how to write from his soul. He has an innate and natural ability to hold his audience willingly captive and engaged through the entire read. The man is a fantastic writer and without question, I am a fan. Keep writing Michael, you clearly have the gift.

Quill says: A Wicked Thing is a sit on the edge of your seat thriller that has been written by a truly gifted wordsmith.

For more information on A Wicked Thing, please visit the author's website at: www.michaelkasenow.com