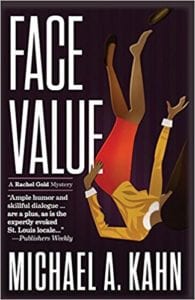 When this mystery starts out, it starts with a bang. At the beginning of this author’s ninth legal mystery, featuring Attorney Rachel Gold, a security guard comes upon the body of a woman in an alley adjacent to a parking garage. The unfortunate victim, Sari Bashir, is a young lawyer at a St. Louis law firm, Warner & Olson.

The death is quickly deemed a suicide. The reason? Because the job of a young lawyer in a large firm is full of late hours and very hard work that can drive a new lawyer into many forms of depression and sometimes, well, sometimes they just quit. This poor girl’s death is put into the suicide file and put aside. Apparently the police on the case did not figure on Stanley Plotkin, who is an employee in the mail room of Warner & Olsen and also a man who suffers from Asperger’s syndrome. Stanley is adamant that this is a murder case so he and his friend Jerry Klunger meet up with Attorney Rachel Gold at the memorial services for Sari Bashir and prevail on her to investigate the young attorney’s death. Stanley is a bit of a savant and people don’t pay a lot of attention to his ideas, but he knows what he’s talking about. He is into a system called the Facial Action Coding System that authorities have used to recognize emotions from facial expressions. Stanley is positive that Sari was very upset before her death, but definitely not suicidal or depressed about anything.

Rachel agrees to investigate the death and gets a team together to help her. As Rachel and company look into Stanley’s ideas, she gives Stanley a free hand in helping with the case, as he is able to read the various emotional expressions on the faces of the people involved. Stanley has used his special skills, as an observer, to convince Rachel that this was definitely a murder and not suicide. Rachel and Stanley, along with Jerry, decide to record a memorial tape of Sari’s colleagues telling little stories and remembrances of Sari. Rachel gives the tapes to Stanley so he can study the expressions on the suspects’ faces. This part of the book was a bit draggy and I suspect a judge would never allow this in a real courtroom. However, in the story, the three friends along with Detective Tomaso of the St. Louis Police Department, are able to get somewhere with the video tape and prove that Sari’s death was not an accident. Now to prove it...

Face Value was an enjoyable mystery with plenty of twists and turns. The characterizations are well written and, good news for the future, the author is on his way to a tenth book in the series.

Quill says: Face Value is a good read with many interesting characters and a writer who knows the law and how law firms are run.