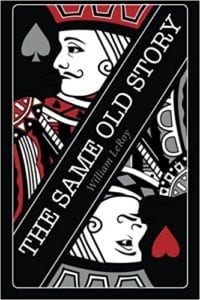 “Johnny was dead; there was no doubt about that.”

The first sentence in LeRoy’s romance mystery may resemble Dickens’ A Christmas Carol.But this story is far from the likes of a Christmas tale. Johnny D’Agostino’s demise at the historic Boston Public Garden on a foggy Halloween night provides enough evidence to rule his death a homicide. Detective Peter Angelo, Johnny’s childhood friend and police colleague, is assigned to the case. The first thing Peter notices when he investigates Johnny’s place is his computer and a set of email exchanges between him (JohnnyD) and a woman named Frankie (Frankie007). One email in particular gives a clue to a regular meeting place, the Ritz-Carlton Cafe. Peter goes there and ends up connecting with a Frankie Fitzgerald, who in turn believes Peter to be Johnny.

Peter decides to play along in the hope of finding Johnny’s murderer, and—as far as Peter is concerned—gathers enough evidence that leads him to believe that Matt Finley, Frankie’s jealous boyfriend who apparently gets wind of the email romance, killed Johnny. Matt has his version about Frankie, including who JohnnyD may be. Frankie sets up a meeting time at the Ritz-Carlton when Matt will finally meet the infamous JohnnyD. But things get twisted once again, and before Peter knows it, he is in Frankie’s apartment. Once she passes out on the sofa, Peter investigates Frankie’s computer. What he discovers is not quite what he expected. Matt does his investigations and learns a thing or two about Peter. The real problem is that both Matt and Peter have fallen for Frankie. Now what?

There are plenty of histrionics to be found in Leroy’s riveting debut! Leroy adds a fresh take to the clichéd lover’s triangle theme that tells the same old story of “all’s fair in love and war,” — love, jealously, and obsession. What makes The Same Old Story so unique is the way Leroy tightly weaves a flurry of elements that will not only keep readers in a tizzy but also make it difficult for them to put the book down. To begin with, his third person narrative, which alternates specifically between two of a small handful of characters: Peter and Matt.

Peter’s and Matt’s sides to the story between Johnny and Frankie as well as Johnny’s demise provide clues — more or less. Because both character’s personal and emotional thoughts get thrown into the mix, everything in the narrative suddenly becomes convoluted, including clues. Leroy adds more to the confusion by numbering chapters according to where each alternative story left off. (Doing a little math, one could easily figure out the real number. But who wants to do math in the middle of a good story? Seriously!)

If that isn’t enough, Leroy makes sure to include copious amounts of nostalgia befitting the melodramatic love theme. Highlighting feminine and masculine characters, Leroy pulls from all the classics — opera, books, and (except for You’ve Got Mail) old movies. To name a few, Tristan and Isolde, Alice in Wonderland, Othello, Wuthering Heights, An Affair to Remember, Casablanca, and Gone With the Wind.

Those are just a few elements. There's more. The Same Old Story closes on an interesting note — one that begs a sequel.

Quill says: While The Same Old Story gives plenty for mystery enthusiasts to ruminate on, it is nothing less than a melodrama buff’s dream come true!