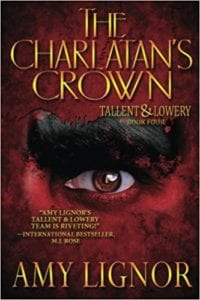 Are you ready for another fantastic roller coaster ride of fun and adventure from the series that just keeps getting better and better? Tallent & Lowery are at it again, this time tracking down the Devil’s Crown in what can only be described as one of the best series in recent memory about a passionate, perfectly matched couple who have a knack for solving mysteries.

At the end of Book three, The Hero’s Companion, author Amy Lignor gave us a peek at what was to come in the next tale when we learned that Leah’s biological mother, Neith, was still alive. As book four opens, we find Neith being held prisoner by the evil Daniel Bauer. We met Bauer earlier in the series – he’s the Australian fortune hunter whose motives are, shall we say, less than pure. I’m convinced Bauer has the hots for Leah, but she is justifiably revolted by the Aussie. Now on to the story...

Book Four follows the hunt for a very special crown that needs a particular emerald inserted into the center to work. Once the two are together, the wearer may just be able to take over the world, or worse. The problem is, Bauer is the one who wants the crown and he needs Leah to find it for him. He also needs her emerald, the one Gareth bought for her in Whitechapel. Apparently the emerald is THE emerald that will make the crown work. How the beautiful tear drop emerald ended up for sale in a store in Athens, Greece, we don’t know...yet.

Leah and Gareth soon learn what Bauer wants, and it has to do with a well-known Norse tale that includes Valhalla and a legion of Aryan soldiers. The crazy Aussie has assembled a small group of equally loonie collaborators, men who claim to be descendants of Hitler’s inner-circle of equally psycho megalomaniacs. Will Leah and Gareth be able to stop these men, keep the emerald from their clutches and deal with Bauer once and for all?

Like the other books in the series, this one takes the reader all over the world. The adventure starts at Leah’s favorite spot, the New York Public Library, and winds through various locations including numerous places made famous by Nazi Germany. Speaking of Nazi’s, they play a prominent role in this story, as does the reading of runes and Norse mythology. While you may think you have a strong background in these topics, you are sure to learn something new from The Charlatan’s Crown. The author, again, has really researched these topics well. I found myself looking up various people, places, and things that play roles in the story. Are they real? Yes, most of them are and it really helps to bring the story to life. Leah and Gareth are undoubtedly the stars of this adventure, but Bauer is coming on strong. He’s a deliciously evil character, one who I look forward to seeing again in future books. He is intent on beating Leah, and her card catalogue mind, and I don’t think he will quit until he reaches his goal. If you’re looking for a fantastic read, one that will swallow you up and force you to read late into the night, check out The Charlatan’s Crown!

Quill says: Another fantastic book in the Tallent & Lowery series, one that you do NOT want to miss!