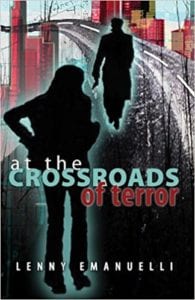 Charlie Johnson is “your average Joe.” He pays his taxes, votes regularly, does volunteer work and his dad is a retired Philadelphia detective. Now he’s about to have a date with a childhood sweetheart, Chelly Robinson. Life is good.

Charlie and Chelly agree to meet at The Dragon’s Den for drinks before heading out for dinner. What they don’t know is that The Dragon’s Den is home to Philadelphia’s most feared Asian crime families, The Flying Dragons. But Charlie never made it to the restaurant for drinks because that morning, on his way to work, he heard a loud noise, like a car backfiring. The next moment, a beautiful Asian woman came out of Chang’s Cleaners, smiled at Charlie, approached his car and placed something into his jacket pocket. Then she disappeared.

The object the mysterious woman placed in Charlie’s jacket was a gun, the gun just used in the murder of Mr. Chang. It isn’t long before the police suspect Charlie is the murderer and he’s on the run, aided by Sherry Mann, a reporter for the local television station. Unfortunately, The Flying Dragons, led by Long Ngo, also want Charlie Johnson and so, when Chelly strolls into their restaurant for her date, Long discovers her connection to Charlie and she is kidnapped. Long and his cohorts want the gun, and the long white dress glove that was discarded with it and they want it NOW.

The story is fast paced and finds the characters going from Philadelphia to Chicago, back to Philadelphia, on to New York City and even to Kansas City. Charlie and Shelly are trying to stay one step ahead of Long and get the boss of the Chicago branch of The Flying Dragons to take down Long. Charlie tells Long to bring Chelly to Chicago where they’ll make the trade and “I am going to let your boss in on how you’ve messed things up here in Philadelphia.” (pg. 56)

Meanwhile, the Philadelphia police are one step behind Long, finally figuring out Charlie is probably not the murderer. Will they be able to stop Long before it is too late? What about the drug trade The Flying Dragons are involved in? And what about poor Chelly? Will she escape or be killed? Many questions get answered midway through the tale with a dramatic shoot out, but just as some questions are answered, new villains and new problems surface.

There is a lot of action in At The Crossroads Of Terror and it doesn’t take long to get wrapped up in Charlie’s dilemma. The author doesn’t hold back and the scenes read true for the gritty inner city streets. For the more squeamish, it should be noted that there are graphic scenes of gang fights, police shootings and rape/torture. To the author’s credit, there are three pages of hotline links at the back and a notation that a portion of each book sale will be donated to RAINN (Rape, Abuse, and Incest National Network).

While the story is a suspense novel, there is also a strong theme of romance running through the pages. At first it appears that Charlie and Chelly will emerge as a couple, but as Charlie spends more time with Sherry, the reader has to wonder who will finally be paired with Charlie. Charlie, too, has to resolve his inner demons, convinced from childhood that he is a coward. His struggles with the Asian crime lords will be the impetus for facing his cowardice head-on.

At The Crossroads Of Terror is told in the present tense, which helps heighten the sense of urgency for the characters. This can be a difficult writing style to pull off and in this book there are numerous places where the tense switches from present to past and then back to present. “As Charlie explains the whole grueling situation to his father, he hopes he hadn’t left out any important detail.” (pg. 83) Also, frequent grammatical problems, “So what are trying to say to me Charlie?” (pg. 79) and some layout problems hinder the flow of the story. A careful editing would greatly enhance the pleasure of reading this novel.

Quill says: A gritty crime novel that keeps the protagonist in mortal danger, and the reader on the edge of his/her seat, throughout the story.

For more information on At The Crossroads Of Terror, please visit the publisher's website at: EPPublishing.com