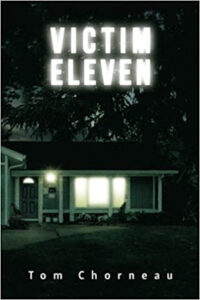 James J. Cole, a former investigative journalist and current private investigator, is attempting to sell his home when he is informed that his house was the site of a rape and murder allegedly committed by the notorious Golden State Killer (a man who was suspected of raping, burglarizing and murdering dozens of people in California between 1973 and 1986). Not knowing much about the sensational coverage of the recent arrest of the alleged serial felon, and potentially worried about how he should deal with this information, Cole embarks upon his own investigation in an attempt to prove that this crime did in fact occur in his home. While searching for answers, Cole is thrown unexpectedly into dangerous territory when he discovers a theory circulating around for years that the Golden State Killer may not have carried out his crimes alone, but with an accomplice.

While Cole is deeply entangled in his own inquiry about the crime committed in his house, he starts a new job as a private investigator for a law firm. His first two assignments, Cole thinks, are fairly mundane, and even a bit ridiculous. But he is quickly assigned to several other cases that not only require more research and involvement tracking down an extensive list of leads, but as Cole quickly discovers, are also a lot more dangerous to conduct.

The overall story is an excellent melange between fiction and fact, and it is obvious that the author did extensive research about the Golden State Killer while writing. The nail-biting suspense and plot twists keep readers engaged throughout the main character’s tireless search for answers. However, because of the concurrent subplots, and many new characters (often with multiple nicknames) involved in Cole’s other investigations, readers are presented with too much critical information and may become lost and frustrated, finding themselves rereading portions of the story in order to understand, and fully appreciate, what is going on. While it is, of course, a reality that an investigative journalist/private investigator may be working on more than one case at a time, perhaps if the author focused solely on, and expanded the original story, it would be easier to follow, and thus a bit more enjoyable to read. This reviewer also felt that although the final chapter tied everything together nicely, it was a bit of an abrupt ending, particularly for Cole and all the adventures (both mundane and harrowing) he successfully went through in order to ultimately get all the answers he was searching for throughout the various cases he was juggling. Maybe there will be continued exploits for James J. Cole in the future? We’ll just have to wait and see.

To learn more about Victim Eleven, please visit the author’s website at: www.tomchorneau.com.