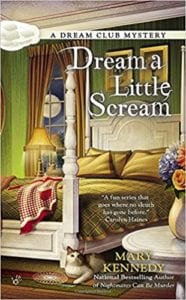 Taylor Blake had moved to Savannah to help her sister turn her business around. Ali was one of those gals who had a “checkered career and a series of failed ventures.” In other words, Ali Blake was a lousy business person and unless she wanted to be living in the streets, she needed some help. All was well and soon Oldies But Goodies, their vintage candy store, was doing quite well. Taylor’s “on-again, off-again” relationship with former FBI agent, Noah Chandler, was beginning to look as modern as Bit-O-Honey twists, but whatever. The Dream Club, however, was a raging success. Exploring and analyzing their collective dreams was fun and New Age cool.

The Dream Club had just added a couple new members, Etta Mae Bosley and Edward Giles. Rose began discussing her dream, a foreboding and sinister one about a kitchen. “I felt an evil presence in the kitchen,” she explained and then went on to talk about a mysterious book on the kitchen counter. It was rather prophetic because the famous chef, Sonia Scott, was soon heading to Savannah to promote her latest cookbook...the very one Etta Mae claimed was hers. As luck would have it, Sonia was going to make a stop at Oldies But Goodies. Taylor and Ali had recently added a café to the store and the publicity would be awesome!

Taylor spotted Jeremy Watts and Olivia Hudson, Sonia’s personal assistant, practically canoodling in the parking lot outside the studio where they were filming. Jeremy was a very married man, but eyes needed to be averted because there were arrangements to be made for Sonia’s visit to Oldies But Goodies. Jeremy’s wife, Leslie, was a former student at the Academy where Dream Club member, Lucinda, was the head mistress so it was best to keep quiet. Some people like Etta Mae would never have the ability to clam up. It seemed like she was never going to stop talking about her family “recipes [that] turned up in Sonia’s new cookbook.” Ugh!

Finally the big day arrived and Sonia Scott was going to cross the threshold of Oldies But Goodies. Taylor and Ali had made several of the dishes from her cookbook to serve up to the crowd. “Darn,” Sonia asked, “do you have cats in here? I can feel my allergies kicking in.” Olivia practically began tearing up the store looking for an EpiPen while Etta Mae Beasley smiled and smirked. “Don’t worry, folks. Everything’s fine,” Ali shouted out, trying to calm the crowd. Things really weren’t fine and soon Detective Sam Stiles, Savannah PD and fellow Dream Club member was bagging up evidence. Had Etta Mae really decided to exact revenge on the thieving cookbook Dixie diva?

This was an amazingly well-crafted, collective detective tale. I didn’t read the first in the series, but it’s definitely one I’m going to have to read. I adored the Dream Club and as soon as I started to read, my disbelief in any New Age concepts went out the window. I loved listening to the prophetic dreams, learning about dream-hopping, and enjoying the members. This was one of those whodunits that was so tightly woven, anyone could have been the one who did in Sonia. Each time I thought I’d figured out the culprit, right along with Taylor, new evidence cropped up to eliminate that person. I do enjoy cozy mysteries, but I haven’t met one as tightly knit since watching Jessica Fletcher in action.

Quill says: This was a sweet, amazingly well-crafted collective detective tale with Taylor and the Dream Club!