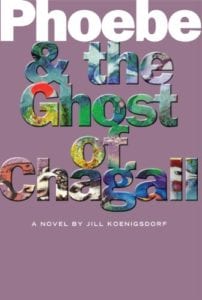 A book that readers will see as a true ‘gift;’ this is one tale that once picked up is impossible to put down.

Our heroine is Phoebe, a woman who is just eking out a living by designing labels for a winery in Sonoma, CA. Pushing forty, poor, divorced and trying desperately to make a living - like many others, the bank is about to foreclose on her and she’s being harassed night and day by creditors.

Our other character? The amazing artist, Marc Chagall. It seems that Phoebe’s father found a painting by Marc Chagall many years ago in an alley in Paris - a painting that was supposed to be delivered to her and her mother, but somehow never arrived.

This was during the liberation of Paris in 1944 when WWII was slowly creeping to a close, and thieves were going around the back streets and stealing art that had been left behind.

Now…Chagall comes back from the dead to help Phoebe locate this painting so that she can get out of debt. Because she is the only one who can see and talk with Chagall, they are quite an odd couple as they set out to find the missing treasure. As Phoebe and Chagall track the painting, they are offered help from some very nefarious folks which includes a Parisian cafe owner who’s a little on the sleazy side; two sisters who are witches; crooked art thieves; art fences; an innkeeper; and many other assorted heroes and immoral characters.

This debut novel is a superb tale! Apparently, the author is a big fan of the artist and read that many of his earlier works came up missing during WWII. The story was so well written that readers will see that the author did a tremendous amount of research on Chagall’s paintings, as well as his early family life and the massive Nazi art thefts that occurred during the war. I was enthralled by this book and look forward to the next.

Quill Says: A great imagination, this author will have all readers begging to meet Chagall.