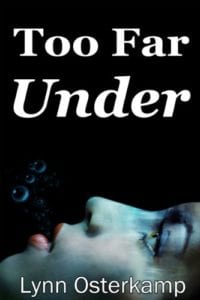 Within the first few pages of Too Far Under, the reader is introduced to Mirabel Townes, learns of her family, her association with Scientology, advocacy for saving prairie dogs and fighting big business. We also witness her murder at the hand (literally) of an unknown assailant. From this brief, fast-paced prologue, the reader is now hooked and can't wait to learn the identity of the killer.

The police rule Mirabel’s drowning accidental, but her three children suspect foul play. The youngest of the children, Angelica, is an “Indigo child” (said to be “psychologically and spiritually gifted”), and has repeatedly told her older sister Lacey that their mother’s death was not an accident. When the three siblings can’t get their father and his overbearing girlfriend to take them seriously, they turn to Dr. Cleo Sims, who teaches a class in paranormal psychology at the local college.

Cleo is quite reluctant to help the Townes children as she doesn’t want to risk her position at the school. Many of her colleagues think her class is quackery so she wants to stay under the radar as much as possible and avoid any trouble. Lacey Townes is a student in Cleo’s class and knows about the professor’s “Contact Project” – a chamber that allows a person to speak with the dearly departed. She’s convinced that Cleo can help them find the truth behind their mother’s drowning.

After much pleading, begging, and cajoling by the children, as well as visits from both Tyler, her surfer dude ghost, and the ghost of a beautiful young women, Cleo agrees to help solve Mirabel’s murder. Before she begins to look for clues, Cleo isn’t convinced that Mirabel’s death was murder, but it doesn’t take her long to dig up quite a few people who would have benefitted from Mirabel's demise. There are the Scientologists who suspected that Mirabel was going to change her will and leave them out of it, a husband and girlfriend who were having financial problems, a drug dealing ex-friend, a land developer whose project was stymied because of Mirabel’s “save the prairie dogs” activities, and a women who was after her father’s money. They all had motive and means, but which one did it? To add to Cleo’s troubles, she needs to find a new nursing home for her mother within a matter of weeks, and the art gallery where her boyfriend Pablo exhibits some of his work (and Mirabel was a silent co-owner) seems to be having problems.

Cleo is hard pressed to find the killer before he/she goes after her and the Townes children. Tyler, the surfing ghost fades in and out from time to time to help, but his clues, wrapped in surfer lingo, are so cryptic that Cleo is usually left more confused after one of his visits.

This is the second book in the Cleo Sims mystery series (Too Near the Edge is the first) and while I have not read the first, I had no trouble following along. As mentioned at the start of this review, the first few pages, with Mirabel’s murder, drew me in immediately. The rest of the book did not disappoint as the author did a wonderful job of keeping the story moving, while developing characters who were interesting and believable. Cleo was a very likeable protagonist, who struggled to help her mother, suffering from Alzheimer’s, while also juggling a boyfriend who was afraid of commitment, and a boss who was not very supportive. All this while helping three frightened kids learn the truth surrounding their mother’s death. While Tyler, the ghost who only spoke in surfer lingo (“you’ll blow it if you miss the good wave”), got a little annoying at times – the tightly knit cast of characters worked well and made this book a very enjoyable read.

Quill says: If you like your mysteries mixed with a little paranormal activity and lots of intrigue, check out this new series featuring Dr. Cleo Sims and her surfer ghost friend Tyler.

For more information on Too Far Under, please visit the author's website at: www.lynnosterkamp.com