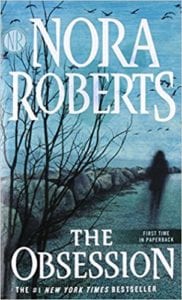 Ah...here she is again. Whether it is her “In Death” series starring beloved Detective Eve Dallas and her cast of truly amazing characters (written under the alias, J.D. Robb), or it is any of the other engaging and thrilling suspense novels that fill bookshelves at all times, Nora Roberts continues to prove that she is a writer of the highest caliber.

In this new tale, it is seventeen years ago when Naomi Bowes follows her father into the woods only to learn that he has been keeping a young girl locked up in a root cellar out there. Waiting for him to depart, Naomi then goes in and sets the poor girl free. Yet, oddly enough, she doesn’t believe her father has done anything wrong. Instead, she thinks the “bad guy” who has hurt many young women over the years is actually someone else. By finally revealing the horrible crimes that made him infamous in his own head, Naomi’s father is caught by the law and eagerly admits to every atrocity.

Fast forward to the present. As much as she’s tried over the last seventeen years, Naomi cannot bury or forget the sins of her father. She has actually become obsessed with his evil mind and horrific crimes and it has harmed her life. Moving to a different place, trying to find a fresh start, Naomi changes her name and tells no one where she’s going. She is now Naomi Carson, a successful photographer living in a lovely place called Sunrise Cove.

Purchasing a house that’s a real eyesore, Naomi truly loves the place. It calls to that creative photographer within her. Making friends with her contractor, his wife and her mechanic-sometimes-musician, Xander, Naomi tries to start a normal life. She even buys a dog. But just as tranquility begins to descend, things start going wrong; young women are turning up dead and reminding Naomi of her own nightmare.

While planning for the future, her past catches up. Seems that someone in Sunrise Cove does know her real identity and is not about to let Naomi forget dear old dad. As bodies pile up, Naomi’s new life falls apart and her defenses go back in place. The obsession she has is always at her very core, and no amount of kindness or normalcy will ever stop the sins of her father from haunting her every step. Or, perhaps, Naomi can rise above this new monster and expose the truth before she’s destroyed for good.

Quill says: Norah Roberts’ is all about creating suspense “perfection,” and she continues to nail it every single time!