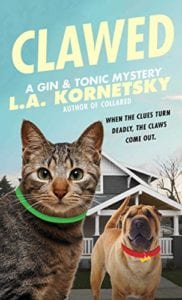 After reading my first Gin & Tonic mystery called Doghouse, I became a quick fan and immediately was excited to read the next book in this fun series from author L.A. Kornetsky titled Clawed. One of the best attributes of these books is the amazing way Kornetsky brings to life the thoughts of the two main animal characters, Penny and Georgie, which absolutely makes me laugh out loud every time.

In this story, with word spreading about Ginny’s event planning skills, she is excited when she receives a call from her first out of town client who is requesting her services. Since this client is from Portland, Ginny decides it will be easiest to just drive down and spend some time there. In addition, the trip will allow her to bring Georgie, her lovable Shar-Pei. Wanting to make a great first impression Ginny dresses in her most professional clothes and arrives at the designated address of the client a little early. Ginny knocks on the door but there is no answer. After a few minutes of complete silence from the house Ginny’s curiosity gets the better of her and she tries to open the door which to her surprise easily swings in. After a quick look around Ginny comes to the conclusion that her client must not be home and decides that it would be best to leave the premises before she gets accused of breaking and entering. Unfortunately, as she turns to leave she discovers a body shoved under the dining room table and it appears that this was no accident; the man under that table has been murdered.

Meanwhile, back in Seattle Tonica and Penny are stuck at Mary’s tending the bar and worrying each day about what Ginny and Georgie are getting themselves into. After hearing about Ginny’s discovery of a murdered man, Tonica cannot help but think that he needs to be there to help her investigate this. However, his duty is to stay at Mary’s and see that everything runs smoothly even though his mind is not really on his job. As soon as he realizes that Ginny could potentially be in danger, his responsibilities are pushed to the back of his mind and he travels to Portland as quickly as possible.

This next installment in the Gin & Tonic mystery series did not disappoint at all and I absolutely loved it. The fun and intriguing dialogue between Georgie and Penny is quite amazing and I find myself smiling and laughing out loud at some of their humorous conversations as they are trying to help solve a mystery. The relationship between Penny and Georgie is a great addition to the equally intriguing relationship between Tonica and Ginny who constantly push each other to their limits. To be honest this series helped me to become quite a fan of mysteries and I’ve never looked back. Whenever the next book comes out I will be sure to look for it with great anticipation.

Quill says: An unbelievably fun and intriguing mystery with a great set of characters!