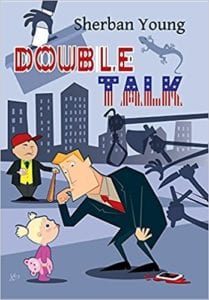 For those who have not yet had the good fortune to pick up a Sherban Young mystery, now is the time to do so! Let’s just say that once you begin reading this title, you will immediately run to the library and/or Amazon and get all the rest.

A character with his own series, Warren Kingsley, is back. Warren, a man who has the face and physique of a god (and the ego to match), also owns the abilities to brood, ignore others, and know deep in his heart that he really is the “best of the best” in most areas. An ex-bodyguard, he is now the speechwriter for the Mayor of Kilobyte.

In Kilobyte the residents are truly multifaceted; they can never have just “one” career. Even Mayor Frederick Abbott is not content with just being a public servant. He also owns a baseball team, he’s a restaurateur, and has his hands (and money) in half of the other companies in town.

Frederick Abbott was bedazzled by Warren Kingsley when they first met. He saw a very handsome man who could easily nab the female vote right away. Warren stole the mayor’s speech off a table and basically edited out most of it. Without looking up his background, the mayor hired this man...not realizing at the time that he’d just employed a speechwriter who believed everyone spoke way too much.

Mayor Abbott is also married to a much younger, prettier wife who has the acting ability of Streep or Loren. She can turn on the frightened waterworks when need be, flutter her eyelashes and show adoration to her ‘old’ husband, and then turn on a dime and be caught in a pool house with a young dog groomer and have a completely believable excuse for the whole thing.

An old acquaintance of Kingsley’s, John Hathaway, walks into Kilobyte one day with his own agenda. Apparently, Hathaway is the only ex-client of Kingsley’s who’s still alive. Trying to get information about the town and its people from his old bodyguard is basically impossible, but Hathaway is there to do a little “detecting” and won’t go away until his own job is complete.

Very soon, strange packages show up for various workers at the Municipal Building and a paid assassin takes a shot at the mayor in his office. The mayor, thinking on his feet, throws both a dog toy and a much heavier bust at the killer, saving his own life. But the assassin escapes and vows to do the job they were hired for. A press secretary ends up murdered, the cops go on the hunt (led by the very cool Sheriff Jenny Blake), and suspects come out of the proverbial woodwork.

Yes, it might be even more thrilling and funny if you began the Warren Kingsley series with book one: Five Star Detour, but this is definitely a standalone that readers will enjoy without knowing any of the Kingsley backstory. This author and his funny, intelligent words will make you wish that he would actually become the speechwriter for someone in this very real election year. That way, at least the jokes would be funny.