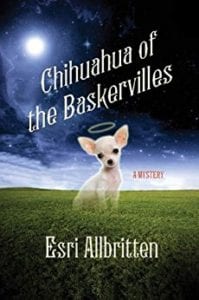 At a spry seventy years, Charlotte Baskerville is enjoying the success of her labors. Her company, Petey’s Closet, a clothing company for Chihuahuas and other small canines, is quite profitable. Unfortunately, Charlotte’s husband Thomas thinks she’s rather batty and would love to have her committed. Add in a cast of oddball employees, from Ivan, the Siberian dog trainer, to Ellen, the designer who holds a grudge, and you have a story that promises a great start to a new cozy mystery series.

One night as she’s getting ready for bed, Charlotte hears the very unique bark of Petey, her beloved Chihuahua who was the inspiration for the company and who, alas, has also passed on to the great dog house in the sky. Charlotte rushes outside to see the ghost of Petey floating through the backyard. Ivan, Ellen, Cheri (Charlotte’s granddaughter), and Thomas hear the commotion and come outside to investigate, but by the time they arrive, all they can find are a few paw prints. Did Charlotte really see a ghost?

Anxious to learn whether she truly saw a ghost, Charlotte calls on Tripping Magazine, a publication dedicated to traveling to spots with a paranormal connection. Once the three person magazine crew of Angus, Michael and Suki arrive, the fun really starts. Surely they’ll be able to determine if a real ghost appeared.

The ghost of Petey (or is it something else?) appears again and this time, Thomas is bent on proving his wife is imagining the ghost. With the full cast in tow, the ghost is chased from the Baskerville’s backyard to the front, with Thomas in the lead. Unfortunately, ghosts can run through oncoming cars and husbands can’t so when Thomas chases the ghost into the street, he gets hit and is pronounced deader than the ghost of Petey.

With the investigation in full swing, Angus, Michael and Suki work together to solve the murder, finding lots of clues along the way. When they discover Charlotte’s will, it becomes clear that several people had a motive to hurt Charlotte but why Thomas? Granted, he was a pain in the butt who wasn’t particularly well liked, but killing him? Maybe it really was a ghost.

This cozy mystery is quite lighthearted in parts, with sections that will make you laugh. The dialogue is crisp and believable, as though you’re sitting around the family table with people who have known each other forever. Set in a town in Colorado known for its ghostly connections, there are some truly odd scenes, such as the re-enacted wake and the annual coffin race. While the guilty confess all too easily at the end, you will be guessing right up till those last few pages just who, or what, is responsible, for the strange events at the Baskerville house.

Quill says: A strong start to a new cozy series. Hopefully, we’ll see more of the gang from Tripping Magazine as they travel the country solving paranormal crimes.